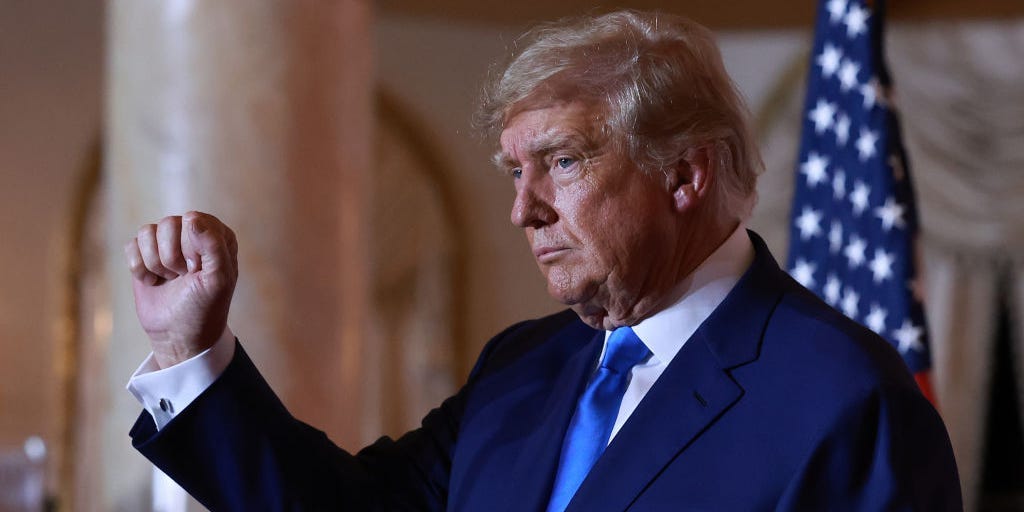 Former President Donald Trump's launch of $99 digital NFTs failed to gin up excitement among investors in the Digital World Acquisition SPAC that is seeking to merge with Trump's Truth Social.
Shares of Digital World Acquisition initially spiked as much as 10% on Wednesday after Trump teased a "major announcement." The stock has had a knack for rallying ahead of anticipated Trump rallies and other developments related to his 2024 re-election bid.

But Digital World stock gave up all of those gains on Thursday after the "major announcement" turned out to be the launch of the 'Donald Trump Digital Trading Card Collection' at a time when the crypto and NFT market has been decimated.

"These limited edition cards feature amazing ART of my Life & Career! Collect all of your favorite Trump Digital Trading Cards, very much like a baseball card, but hopefully much more exciting... Only $99 each! Would make a great Christmas gift. Don't Wait. They will be gone, I believe, very quickly!" Trump posted on Truth Social.

Instead, investors likely wanted to hear from Trump either something related to his run for the US Presidency in 2024, or perhaps even more importantly, developments related to Truth Social and their pending merger with Digital World Acquisition.

The SPAC has so far been unable to obtain the necessary amount of shareholder votes to approve their proposed merger with Trump's social media company and Twitter competitor. Instead, the SPAC secured enough votes to delay its merger deadline with Truth Social until September 2023.

If the SPAC fails to complete the merger by then, it will have to refund its investors $10 per share. The stock currently trades at around $20, suggesting 50% downside from current levels if the deal doesn't go through.
#Donald Trump

Oh ya 52 days ago
I have read that sometimes older people revert back to childhood. This must be a example
View all comments (1)Add comment