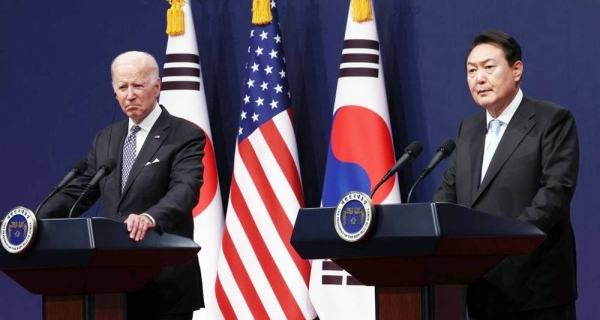 Biden says, no response from N. Korea to US vaccine offer of COVID vaccines

President Joe Biden said North Korea has not responded to a US offer of COVID vaccines, as the country battles its first acknowledged outbreak.
Nearly 2.5 million people have been sickened by "fever" in North Korea and it is under a nationwide lockdown, according to the country's state media.

It is thought to be particularly vulnerable because it has little testing or vaccine supply.

Biden announced the offer at a press conference in South Korea.

"We've offered vaccines, not only to North Korea but to China as well, and we're prepared to do that immediately," Biden said in a joint appearance with South Korean President Yoon Suk-yeol.

"We've got no response," he added.

The isolated regime of North Korea has previously turned down offers of vaccines from COVAX, the global vaccine-sharing scheme, and from South Korea, as well as reportedly declining other offers.

Instead it claimed to have successfully kept COVID out of the country by sealing its borders, although experts believe the virus has been present there for some time.

State media has recommended remedies such as herbal tea, gargling salt-water and taking painkillers such as ibuprofen, while the country's leader, Kim Jong-un, has accused officials of bungling the distribution of national medicine reserves.

China is also struggling to control a wave of infections from the highly transmissible Omicron variant, with tens of millions of people under some form of lockdown.

At the news conference in the South Korean capital, Seoul, President Biden said he was willing to meet Kim under the right circumstances.

His predecessor, Donald Trump, held a historic summit with Kim in Singapore in 2018 and became the first US president to set foot in North Korea the following year.

But two years ago, Kim questioned whether there was any need to continue "holding hands" with the US.

The US and South Korean presidents also agreed to deploy American weapons if necessary to deter North Korea and to increase military drills — which had been scaled down in recent years in an effort to reduce tensions.
#Donald Trump  #Joe Biden  #Vaccines  #vaccine  #Covax  #Covid
Add Comment