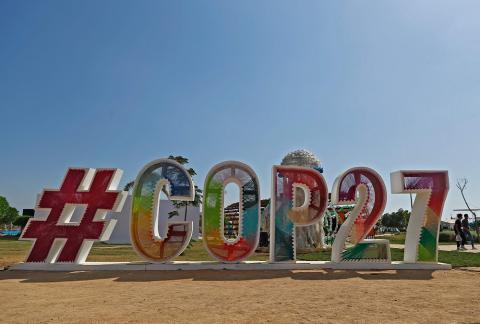 More than 100 world leaders are about to discuss a worsening problem that scientists’ call Earth’s biggest challenge.
Nearly 50 heads of states or governments on Monday will take the stage in the first day of high-level international climate talks in Egypt with more to come in the following days.

Much of the focus will be on national leaders telling their stories of being devastated by climate disasters, culminating on Tuesday with a speech by Pakistan Prime Minister Muhammad Sharif, whose country’s summer flood caused at least $40 billion in damage and displaced millions of people.

Among the lineup for Monday will be the heads of big oil producers Saudi Arabia and UAE; untested right-leaning prime ministers from the UK and Italy wary of government overreach; and leaders from poor climate-vulnerable nations like Niger and Palau keen for international funding.

Scores of other heads of state will speak in a parade of climate oratory that will spill into Tuesday, but many of the world's biggest emitters will be left until next week or have been left off the schedule entirely.

US President Joe Biden will arrive next week, as will newly elected Brazilian President Luiz Inacio Lula da Silva. Chinese President Xi Jinping is not scheduled to attend COP27, but he will have an envoy at the conference. India is not on the list, and no representatives from Russia, the target of western sanctions for its war on Ukraine, are currently on the schedule.

Egypt has officially taken the reins as COP host from the UK and has billed the conference as one that will turn the pledges made at the 2021 climate talks in Glasgow into action.

Delegates on Sunday set a positive tone by agreeing to add discussion of compensating poor nations for climate damage to the conference agenda for the first time ever, something that will usher in rounds of tough negotiations.

Other things to watch will include a World Trade Organization report expected Monday about the role of trade policy in climate change, and some expected announcements about forests as climate sinks.
#Joe Biden
Add Comment