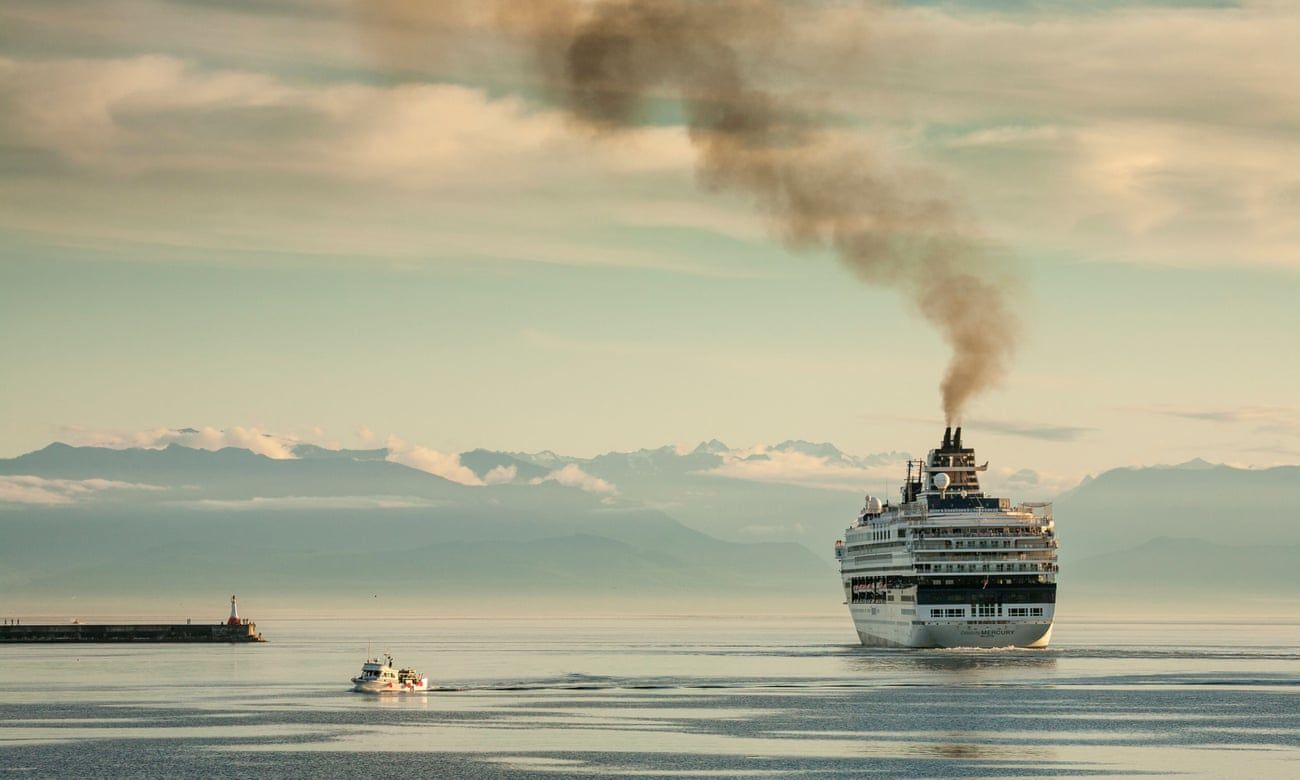 From the comfort of cruise ships, a typical trip to Alaska offers magnificent views of glaciers and untamed national parks, and visits to quaint seaside towns. For years, these draws have made cruises to Alaska the most booked US holiday.

But the journey to those pristine areas, which involves sailing along Canada’s west coast for two or three days, is leaving behind a trail of toxic waste, including within marine protected areas (MPAs), according to new research.

More than 31bn litres (8.5bn US gallons) a year of pollution is estimated to be discharged off the west coast of Canada by cruise ships on their way to and from Alaska, according to a report by the environmental organisations Stand.earth and West Coast Environmental Law (WCEL).

“There’s this perverse incentive to treat Canada like a toilet bowl,” says Anna Barford, Canada shipping campaigner at Stand.earth. “They’re just using us like a highway and tossing stuff left, right and centre.” 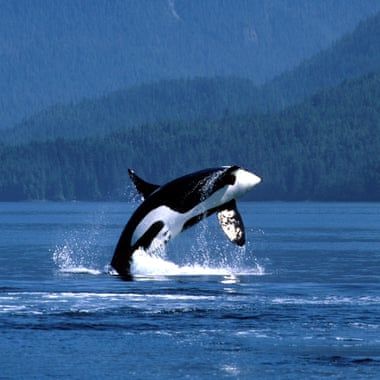 Across Canada’s 151,019 mile (243,042km) coastline, ships generate 147bn litres of harmful waste each year, equivalent to 59,000 Olympic-sized swimming pools, according to a March 2022 report by WWF-Canada. Based on data from more than 5,000 vessels, the report found cruise ships were the largest polluters, despite making up only 2% of the marine traffic analysed.

Cruise ship pollution includes large volumes of toxic sewage from toilets, greywater from sinks, showers and laundries, and bilge water – the oily liquid that collects at the lowest part of a ship. By far the largest source of pollution identified in the WWF report was from so-called scrubbers – devices installed to remove exhaust gases such as sulphur oxide and nitrogen oxide, as well as particulates, from the heavy bunker oil used as marine fuel. The scrubbers create an acidic wastewater containing a cocktail of chemicals.

On a one-week trip to Alaska and back along the Canadian coast, a cruise ship will generate nearly 200m litres of waste from scrubbers, according to the Stand.earth and WCEL report. While ships can decide whether to discharge at sea or within a port, most waste from scrubbers is dumped as it is generated.

Globally, cruise ships have a patchy record of maintaining environmental regulations, including within Alaska, but the Pacific waters off the coast of British Columbia are particularly polluted. This is due to the many cruise ships but also because Canada’s federal dumping regulations are less stringent than the US laws, according to Michael Bissonnette, a lawyer from WCEL, particularly compared with regulations in Washington and Alaska – the two US states at each end of Canada’s west coast. 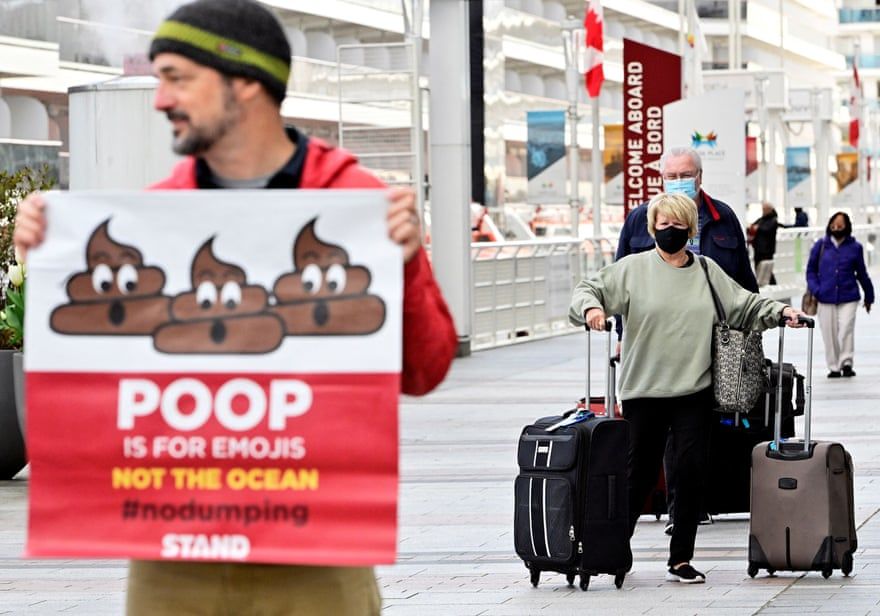 A protest in April against the dumping of sewage by cruise ships arriving in Vancouver.

In Washington, more than 6,000 sq km (2,300 sq miles) of ocean habitat is protected in the Strait of Juan de Fuca and Puget Sound, near the Canadian border, and now classified as a no-discharge zone. Alaska requires cruise ships to apply for and receive permission to discharge sewage and greywater.

In Canadian waters, untreated sewage from cruise ships can legally be dumped outside a 12-nautical mile limit under vessel pollution regulations, which can often overlap into critical habitats. Meanwhile, treated sewage – which includes the waste from toilets and greywater from sinks and laundries – can be discharged three nautical miles from shore.

Sigrid Kuehnemund, vice-president of wildlife and industry at WWF-Canada, says that while each federal MPA has its own regulations, in Canada very few prohibit operational waste discharges – all the waste that accumulates onboard when ships are running. “The regulations that are protecting MPAs at the moment sort of give the shipping industry a free pass, and there aren’t clear regulations that would restrict dumping within those boundaries.”

There are efforts under way to tighten pollution rules. In April, on the eve of the new cruise ship season, the federal government department Transport Canada announced new measures to limit discharges of greywater and sewage from cruise ships operating in Canadian waters.

However, while welcome, the move is not enough, Bissonnette says, noting that the measures are voluntary and do not apply to scrubbers. 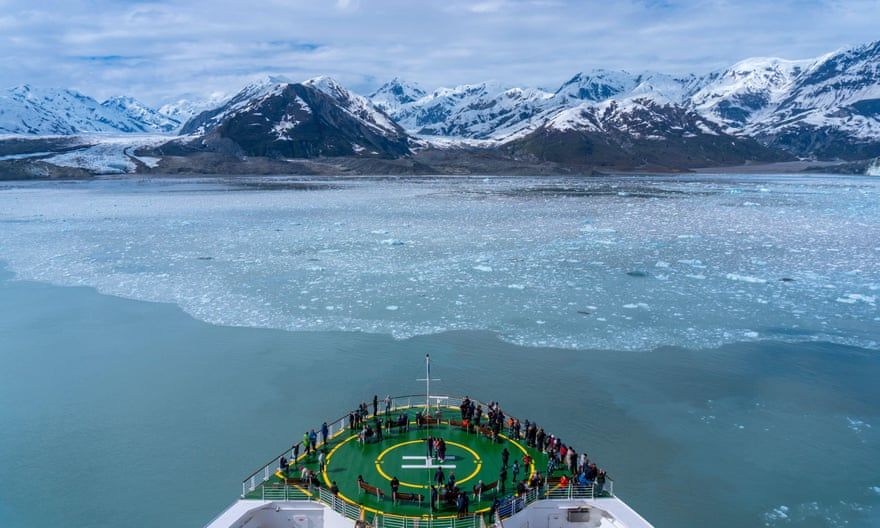 Tourists visit the Hubbard glacier on a cruise to Alaska.

When released into the ocean, the wide array of toxic substances pose a significant threat to aquatic wildlife, and the habitat and food webs on which they depend, including threatened populations of sea otters and orcas that live off British Columbia’s coast.

About 10% of scrubber washwater discharged from ships off British Columbia occurred within critical habitats of orcas, according to an analysis by the International Council on Clean Transportation. Of particular alarm, says Kuehnemund, is the threat to wildlife in Scott Islands marine national park, a cluster of five islands off the north-western tip of Vancouver Island. This protected area is subject to the highest amount of pollution from cruise ship dumping, according to WWF’s report.

Lying on a busy route for cruise ships, the park holds some of the largest rookeries of Steller sea lions in the world. Each spring, more than 1 million seabirds – including 90% of Canada’s tufted puffins and half of the world’s Cassin’s auklets – breed on the island’s cliffs. Kuehnemund describes the area as “a biodiversity hotspot”. 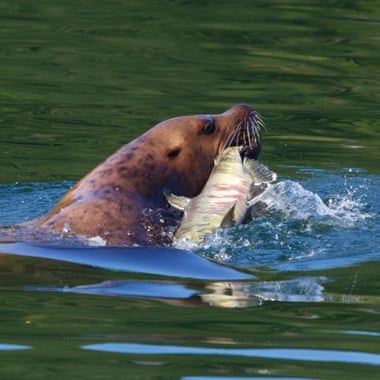 A Steller sea lion feeding on salmon off Alaska’s coast.

There is fear in some coastal communities that as cruise ship traffic increases, so too will the threat to their waters. Popular port destinations including Victoria and Seattle have seen protests at the return of cruise ships after the lifting of pandemic restrictions.

The fishing communities of south-east Alaska also complain of dumped waste in their waters bordering Canada, fearing that critical fish species are being exposed to harmful substances.

One fisherman, Mark Severson, recalls in the summer of 2019 sailing through miles of foamy yellow waters in Petersburg, a small island community about 30 miles from the Canadian border and a popular port along the Alaska cruise route. Since then, Severson and his wife, Karen, have been advocating for stronger monitoring of waste dumping on cruise ships.

“The passengers that love the Alaska cruise do not even realise that the ships are polluting our pristine parts of the world,” he says.

With the new pollution measures in place, a spokesperson for Transport Canada said: “Canada is among the countries with the most stringent requirements for these types of discharges in the world.” The department said it recognised concerns regarding scrubber waste in Canadian waters and was working to develop approaches that could reduce discharge.

But Barford argues that only when Canada implements mandatory regulations will the problem of cruise ship pollution be tackled. “It’s a terrible way to say goodbye to a community that you’ve just visited,” she says. “Waving from the back as the ship empties out its tank. This is not something I would want to leave behind.”

Oh ya 31 days ago
Canada should just ban cruise ships from their waters. It would not take long for the ships to change their habit, but Canada has a commie running the country that belongs to K Swab who is trying to destroy the world

James Dertien 31 days ago
I think you should rethink the title of your article. Those ships are NOT US flag ships.
View all comments (2)Add comment