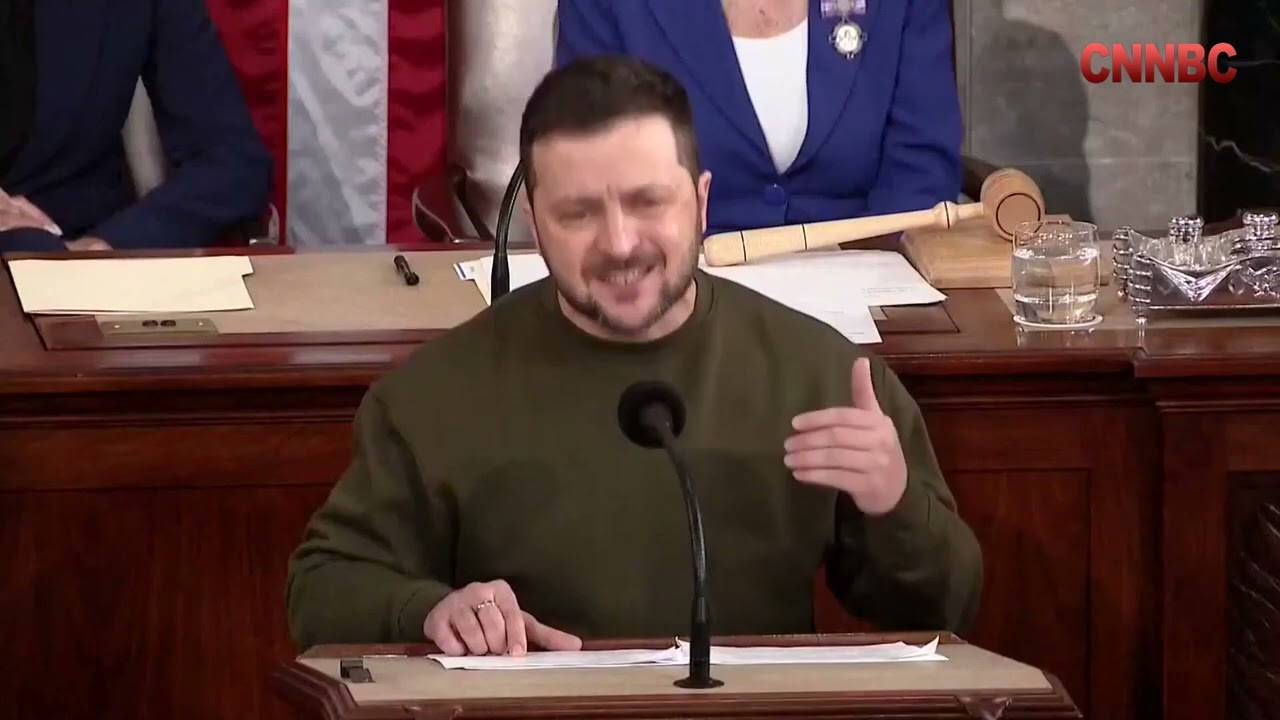 “All the world's a stage, and all the men and women merely Players”

President Volodymyr Zelenskyy’s carefully choreographed blitz of Washington was crafted as one part celebration of Russia’s failure to crush Ukraine, one part appreciation for the American taxpayers funding the battle, and one part sales pitch for keeping a fragile coalition together in the long, bloody and freezing winter ahead.

But between the lines were revealing hints of Zelenskyy’s worries about the year ahead.

For all the repeated talk of “victory,” and the comparisons of the current moment to the turning of World War II at the Battle of the Bulge, Zelenskyy and his top military officials doubt that the Russian forces that invaded in February can be vanquished anytime soon. And the Ukrainian president surely knows his country’s remarkable resilience in the first year of the war could be threatened in the second, and the resolve of its saviors could begin to waver.

A Russian buildup of forces has many officials wondering if a humiliated President Vladimir Putin is plotting a new attack. And for the first time, there are hairline fractures — but not cracks — among some allies and partners, including a minority of Republicans who question whether the United States should be spending tens of billions for a nation that is not a treaty ally.

It was up to Zelenskyy to address all of that and make the case for more without actually reading out a shopping list. He did so in a speech that was carefully designed to appeal to many constituencies, one in which the Ukrainian president came off as grateful and yet gently demanding more. He wants Abrams tanks and F-16 fighters, layered air defenses and the Patriot missile system that President Joe Biden announced would soon be on its way.

Not surprisingly, Zelenskyy, the performer turned politician turned media-savvy wartime leader, focused his appearance to highlight good news. Russia has been in retreat, the U.S. has provided ever-more-powerful weapons, there is plenty of money for more, and the Western alliance is still intact.

“Ukraine is alive and kicking,” he told the joint session of Congress, appearing in a somewhat cleaned-up version of his instantly recognizable drab green T-shirt, a modest concession to the formality of a speech from the podium of the chamber.

Yet he acknowledged the sheer mass of the Russian force now being reassembled as Putin tries to recover from surprise Ukrainian victories such as those at Kherson and Kharkiv, where Russian occupying forces were driven into retreat this fall. U.S. military commanders worry that the 300,000 Russian conscripts, even if quickly and poorly trained, will form a bigger enemy force than any thrown at Ukraine yet.

After thanking Congress for the weapons and ammunition it has provided, Zelenskyy asked: “Is it enough? Honestly, not really.”

A bit of nervous laughter swept through the House chamber.

He was, of course, turning to the real reason for his visit. From the start of the conflict, Zelenskyy seemed to intuit that he needed to be more than an inspiring leader — he needed to be an arms importer, coaxing out of the Biden administration longer-range weapons that could inflict on Russia the kind of damage it has wrought, with fiery efficiency, on Ukrainian civilian critical infrastructure. And by any measure he has been successful, gradually getting ever more powerful offensive and defensive weapons, even as Biden has withheld the F-16s and Abrams tanks.

On Wednesday evening, Zelenskyy tried to appeal to the minority of Republicans who are reluctant to spend more in a conflict whose end is nowhere in sight. He raised the surprising new role of Iran, whose provision of drones helped bail out Russian forces who were running out of precision weapons.

“It is just a matter of time when they will strike against your other allies,” Zelenskyy said, a clear reference to Israel. It was a subtle way of saying that the war is not just Ukraine’s fight, but part of Washington’s long standoff with a state sponsor of terror that is edging closer than ever to the capability — if not necessarily the intent — to build nuclear weapons.

With that one line, he married Ukraine’s recent confrontation with Iran over drones to Washington’s long-standing one over the Iranian nuclear program, part of his strategy of describing the war in his country as something bigger, a battle over preserving democracy and the post-Cold War world order.

And he made clear, without quite saying so, that the biggest mistake now would be to give Putin what the Russian autocrat most desires: time to let brutally low temperatures, extensive blackouts, water shortages and a campaign of terror from the sky break Ukraine’s will and fragment a surprisingly united Europe.

“Russia is using winter as a weapon,’’ Biden said at his news conference with Zelenskyy at the White House on Wednesday afternoon, saying Russia was “freezing people, starving people, cutting them off from one another.”

The attacks on Ukraine’s power grid and water supplies have taken a grim toll, sending streams of refugees fleeing the country again, including tens of thousands who had returned to their homes over the summer.

Air defenses have taken down a large percentage of the drones and missiles fired at Ukraine’s cities and infrastructure, but the number of attacks is so overwhelming that plenty get through. There is little prospect that will change anytime soon. It will take months to build the kind of layered defenses needed to protect against the variety of attacks launched by Russia.

Zelenskyy’s aides, meanwhile, are publicly debating whether it is wiser to stay on the attack this winter or rest and regroup. A similar debate is underway in Moscow, U.S. intelligence officials say. Andriy Zagorodnyuk, a former Ukrainian defense minister who is now an adviser to the Zelenskyy government, said in an interview that Putin “plans new mobilization and another offensive in the first quarter of 2023. That makes securing the right amount of military assistance for Ukraine critical.”

Many U.S. officials disagree, and think Putin is in no shape to risk another major military operation.

And while Congress is expected to soon pass a $45 billion package of additional arms and support for Ukraine, over the objections of a small but vocal group of Republicans, the longer-term question hovering over the discussions in Washington is how to think about helping Ukraine if the war stretches on for years, as many senior officials now say they expect.

Putin, they say, may have given up his hopes — at least for the next few years — of taking the entire country.

But they fully expect him to conduct a long, grinding conflict in the south and east, centered on the provinces he has declared are part of Russia. Putin himself got a bit of the last word Wednesday, saying he would spend whatever it takes, and take whatever time is required, to meet his goals.