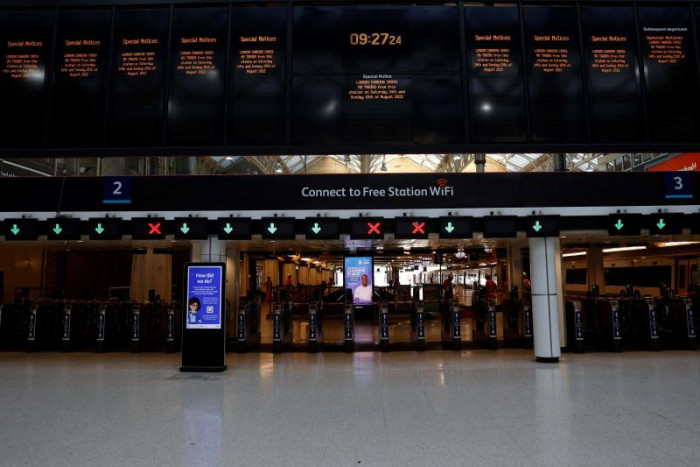 Football fans and holidaymakers faced travel woe Saturday as train drivers walked out across the United Kingdom, the latest in a series of industrial strikes amid spiralling inflation.
Members of the Aslef union at nine train companies are staging a 24-hour strike over pay and working conditions, bringing large parts of the network to a standstill, with no service in some areas of the country.

"The companies have said that they cannot, or will not, give our members an increase," said Mick Whelan, Aslef's general secretary.

"They blame the government... while the government says it's down to the train operators. So, we are caught in a Catch-22 situation where each side blames the other."

The train network has already been crippled by previous strikes, including a three-day walkout in June that was the country's biggest for 30 years.

They, and other industries, are demanding higher pay to mitigate inflation that is forecast to hit 13% by the end of the year.

Further rail strikes are planned for Aug 18 and 20, with London Underground and bus staff set to stage action on Aug 19.

The Department for Transport said claims it was blocking negotiations were "entirely false".

"We have said from the outset we urge the unions and industry to agree a deal that is fair for railway staff, passengers and taxpayers," it said in a statement.

Bin collectors and staff in the postal, court and telecom sectors are among those who have voted to strike.
Add Comment