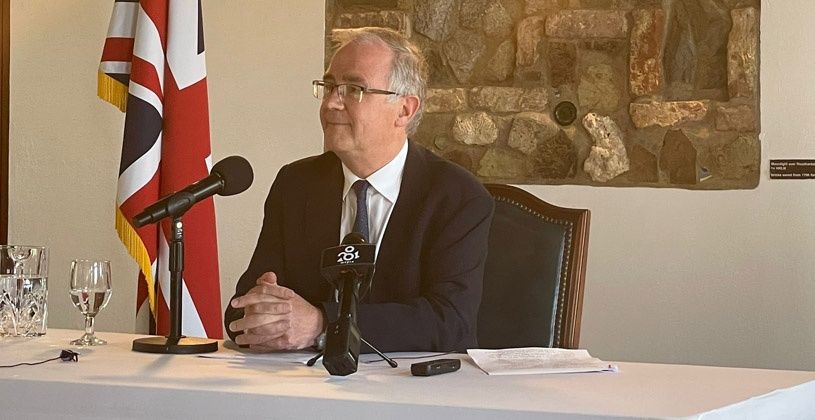 U.K forcing BVI to cancel democracy, back to colonialism, “temporarily” for at least two years

Commissioner Gary Hickenbottom reports that with a heavy heart that, “I have concluded that the only way in which the relevant issues can be addressed is for there to be a temporary suspension of those parts of the Constitution by which areas of government are assigned to elected representatives”.
The Commission of Inquiry (CoI) report has recommended the temporary partial suspension of the BVI constitution and criminal investigation as part of public sector reforms for the BVI.

On Friday, April 29, Governor John Rankin delivered some of the findings of the Report submitted by Sir Gary Hickenbottom. The Governor noted that the UK, leaders in the BVI, and others will be meeting in the coming days to decide on the report. UK Minister with responsibility for the Overseas Territory, Amanda Milling was expected to receive a BVI delegation to discuss the CoI report. Instead, Minister Milling will be visiting the BVI next week to hold discussions.

In view of the recent developments involving the arrest of Premier and Minister of Finance, Hon. Andrew Fahie and another government official on money laundering and drug charges, Governor Rankin decided it was necessary to publish the Corruption of Inquiry (CoI) report in its entirety to the general public immediately.

One of the four overarching recommendations stemming from the report was an interruption of the political system in the BVI to combat the severity of the concerns outlined.

Commissioner Gary Hickenbottom reports that with a heavy heart that, “I have concluded that the only way in which the relevant issues can be addressed is for there to be a temporary suspension of those parts of the Constitution by which areas of government are assigned to elected representatives”.

The report has also warned, “Unless the more urgent and drastic steps are taken, the current situation with elected officials deliberately ignoring the tenets of good governance will go on indefinitely.” Owing to this, the people of the BVI deserve better. The report also recommends the intervention U.K Government to circumvent "abuses" pointed out in the report.

This assistance has been recommended to take the form of partial temporary suspension of the BVI constitution.

The Governor has stressed that while no formal decisions have been made about the implementation of the recommendations, the Commissioner states that the Government of the United Kingdom is obligated to protect the people of the Virgin Islands from the ravages of poor governance.

To uphold the tenets of democracy, the Commissioner has recommended dissolution of the House of Assembly, and cessation of ministerial government for an initial period of 2 years. The 2-year interval will feature a Governor-led administration, which will be supported by an advisory council.

This recommendation, along with 3 other major recommendations and 44 minor ones, has been reached by the Commissioner on the basis of the report’s findings.

For example, the report found that “the elected government and successive administrations have sought to avoid good governance” and the people of the BVI have been served poorly, through the neglect of the principles of democracy.

The Governor stressed that most importantly, the people of the BVI must consider the recommendations carefully.

Questions in the public domain have been centred on what it would mean for the democratic progress of the BVI, should these recommendations be administered fully or partially.
#Commission of Inquiry  #the Virgin Islands  #John Rankin  #Fahie  #CoI
Add Comment