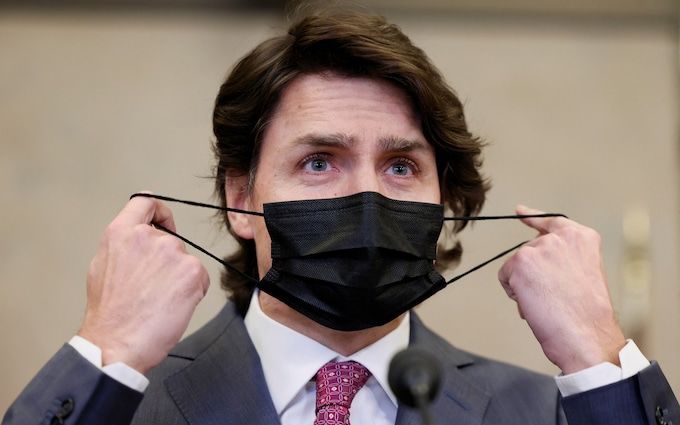 A lawsuit has shown Canada's travel vaccine mandate had little to do with science and everything to do with politics
On August 13, 2021, two days before Canadian prime minister Justin Trudeau called a federal election, his government made a major announcement that “as early as at the end of September” federal government employees would be subject to a vaccine mandate. Further: “no later than the end of October” a vaccine mandate for travellers would also be implemented.

The prime minister’s tough position in the fall of 2021 was a far cry from what he said in March 2021, when Trudeau asserted that every Canadian who wanted to be vaccinated would have a dose available by the fall, implying that it would be voluntary – at a time when Canada was struggling to procure enough vaccine doses and was lagging far behind the UK, US, and other major Western countries in its vaccination campaign.

The vaccine mandate proposal was to become a cornerstone of Trudeau’s re-election bid. Speaking in a suburb of Toronto, home to Canada’s largest, and one of the world’s busiest airports, the prime minister reiterated his government’s intention – presumably if re-elected – to impose vaccine mandates on all sectors under the federal government’s control, which boils down to federal employees and travel.

Trudeau always maintained his government’s Covid policies were based on the science and the latest evidence. Yet, his shifting rhetoric, before and after his election call, tells a different tale. Thanks to a civil lawsuit against the travel mandate by two British immigrants, we’ve now seen inside the guts of part of Trudeau’s Covid machinery, and it’s become abundantly clear that it has little if anything to do with science and everything to do with politics.

From recently released court documents, which I broke in a story for Bari Weiss’s Common Sense, show us senior government bureaucrats scrambling to find a scientific rationale for the travel mandate mere days before it was due to come into force. We’ve had the opportunity to see into the inner workings of Trudeau’s vaccine machinery thanks to two British immigrants, Shaun Rickard and Karl Harrison, who filed a civil suit against the Trudeau government in the Federal Court. Thanks to their efforts, and that of their attorney, Sam Presvelos, the affidavits, testimonies, and cross-examination of key government witnesses are now in the public domain.

These documents clearly show us that the bureaucrat charged with holding the pen, under repeated cross-examination, refused to go into details on who ordered the mandate, citing, “Cabinet confidentiality”. Exactly why the rationale for a public health mandate should be so confidential raises the disturbing possibility that there really was no rationale at all. It’s evident that a political decision was taken by Trudeau and his cabinet to go ahead with the mandates, and the hapless bureaucrats were charged with coming up with some rationale, any credible rationale after the fact.

As it happens, the bureaucrat in charge of crafting one of the world’s “strongest vaccination mandates in the world”, according to the bureaucrat herself and Trudeau, has an undergraduate degree in English literature and self-evidently didn’t have the scientific knowledge to take a call. Neither were there any doctors, epidemiologists and scientists on her team, a secretive panel whose membership is nowhere published, and which rates a passing mention on the government’s website.

The federal government’s vaccine mandates were only the icing on the cake on top of provincial vaccine mandates, masking and distancing requirements, and some of the harshest lockdowns in the Western world. Under Canada’s federal system, these fall under provincial jurisdiction, although they certainly had the moral support of Trudeau’s federal government. Canadians, especially the unvaccinated, were virtually prisoners in their own homes and in their own country. Except, of course, unvaccinated Ukrainians, who were allowed to enter Canada after the war started, even when unvaccinated Canadians were barred from travel. Perhaps, if they tried hard enough, someone could come up with a “scientific” rationale for this as well. They might also need to work a bit to find a scientific basis for why, if the vaccine mandate was necessary, it wasn’t imposed before the election, but afterwards.

The five million or so unvaccinated Canadians were, ultimately, pawns in a political chess game. Trudeau cleverly latched onto vaccination, and government mandates flowing from them, as a potent wedge issue in the lead up to the fall 2021 snap election he called. He was hoping to win his Liberal government a majority, which was languishing in a minority position in the House of Commons, having squandered a previous majority thanks to public disgust at corruption and cronyism scams in his government.

As it happened, Trudeau’s gambit didn’t pay off, and his Liberals returned, again, with a minority — although, given the quirks of Canada’s Westminster system, the Conservatives, two elections in a row, won the popular vote, but lost the election. Trudeau now clings on to power in an alliance with the Socialist New Democratic Party and likely won’t face the voters again until 2025.

The tale of Trudeau’s vaccine mandates has ramifications far outside Canada. The world over, governments have invoked draconian powers, heretofore only used in wartime, to control and regulate their people and curtain fundamental individual liberties, such as the right to gather or the right to mobility. Everywhere, people are told by their governments, much as Trudeau told Canadians, we’re so sorry, we hate to restrict your freedoms, but we’re just following the science and the evidence. We know, in the case of Canada’s travel mandate, that this is simply false. In the Canadian case, Trudeau’s ministers have made it clear that the suspended mandates could come back, as, indeed, could Covid-based restrictions the world over.

Thanks to two British immigrants, we now know how the Covid policy sausage is made in Canada, and it isn’t pretty.
#vaccine  #Covid
Add Comment