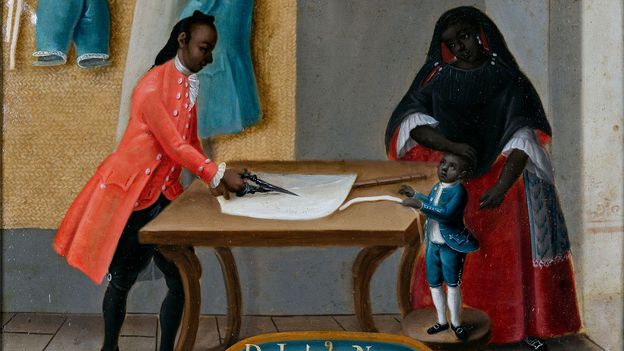 The colonial clothing that reveals hidden truths about race

Dress codes shown in 18th-Century art can tell us a lot about race and identity – both then and now. Cath Pound explores the surprising details hidden in the "Casta" paintings of Latin America.

The history of colonial Latin America is one with which the world is unfamiliar – yet a new exhibition at the Blanton Museum of Art uses the visual representation of clothing and textiles in an attempt to rectify that. Painted Cloth: Fashion and Ritual in Colonial Latin America focuses on the 1700s, a time when Spain was tightening its grip on its territories in the face of increasing French influence.

The Casta paintings featured in the exhibition, which take their name from the casta system that the Spanish authorities invented to define a hierarchy of race, are particularly eye-opening. The genre emerged in what is now Mexico, and to a lesser extent Peru, in the 18th Century. Created in series, with an occasional multi-image single panel, the paintings were intended to illustrate the diversity of ethnicities living in the region, and the mixed races that resulted from their unions. They reveal the existence of a racially diverse and integrated population, the extent of which may well surprise contemporary audiences, while also inviting questions about modern-day attitudes to race and racism. 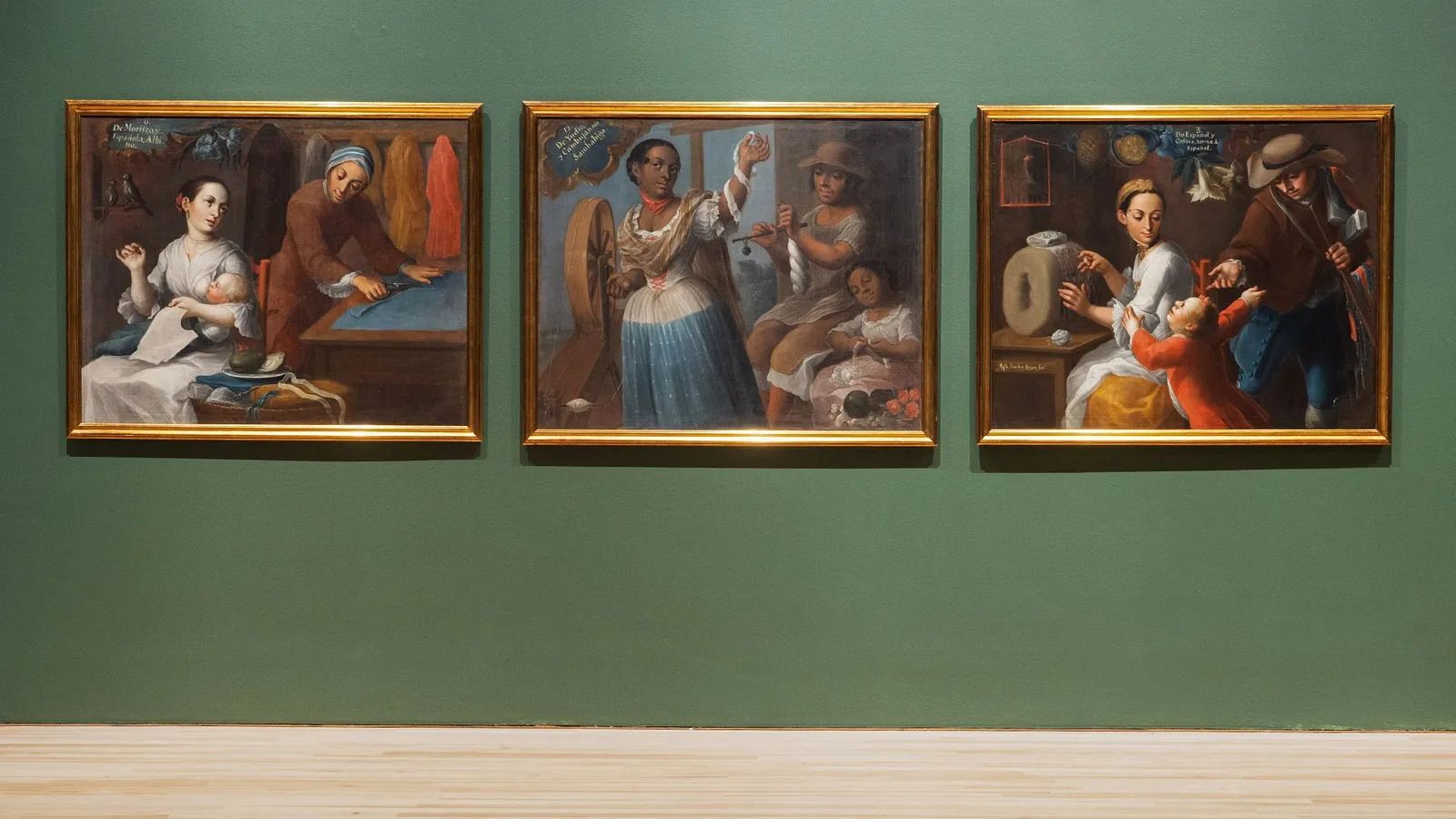 "They address something which continues to be important – the hybridity of cultures, with all the movement of people… we are still struggling with how identity is formed," says curator Rosaria Inés Granados. The Spanish invasion of what is now Mexico and its surrounding communities in the 16th Century had a devastating effect on the region's social fabric. The invaders imposed their culture and their own indicators of social class, while simultaneously trying to convert the indigenous population to Catholicism. Unions between indigenous women and Spanish men – some forced, some consensual – and the forced migration of enslaved black people from West Africa resulted in a multi-ethnic co-existence which the authorities defined and controlled via the casta system.

Paintings such as Negra de Guinea O Criolla. Español. Producen. Mulatos, and Yndia Serrana. O Civilizada. Produce mestiso, both created around 1770 by an unknown artist in the circle of Cristóbal Lozano, show mixed-race couples and their offspring. The paintings are labelled in an almost anthropological manner, with subjects defined via terms such as mulatto or mestizo.

"We know that many of them were made for cabinets of Natural History. They were not made to be part of a domestic setting," explains Granados. 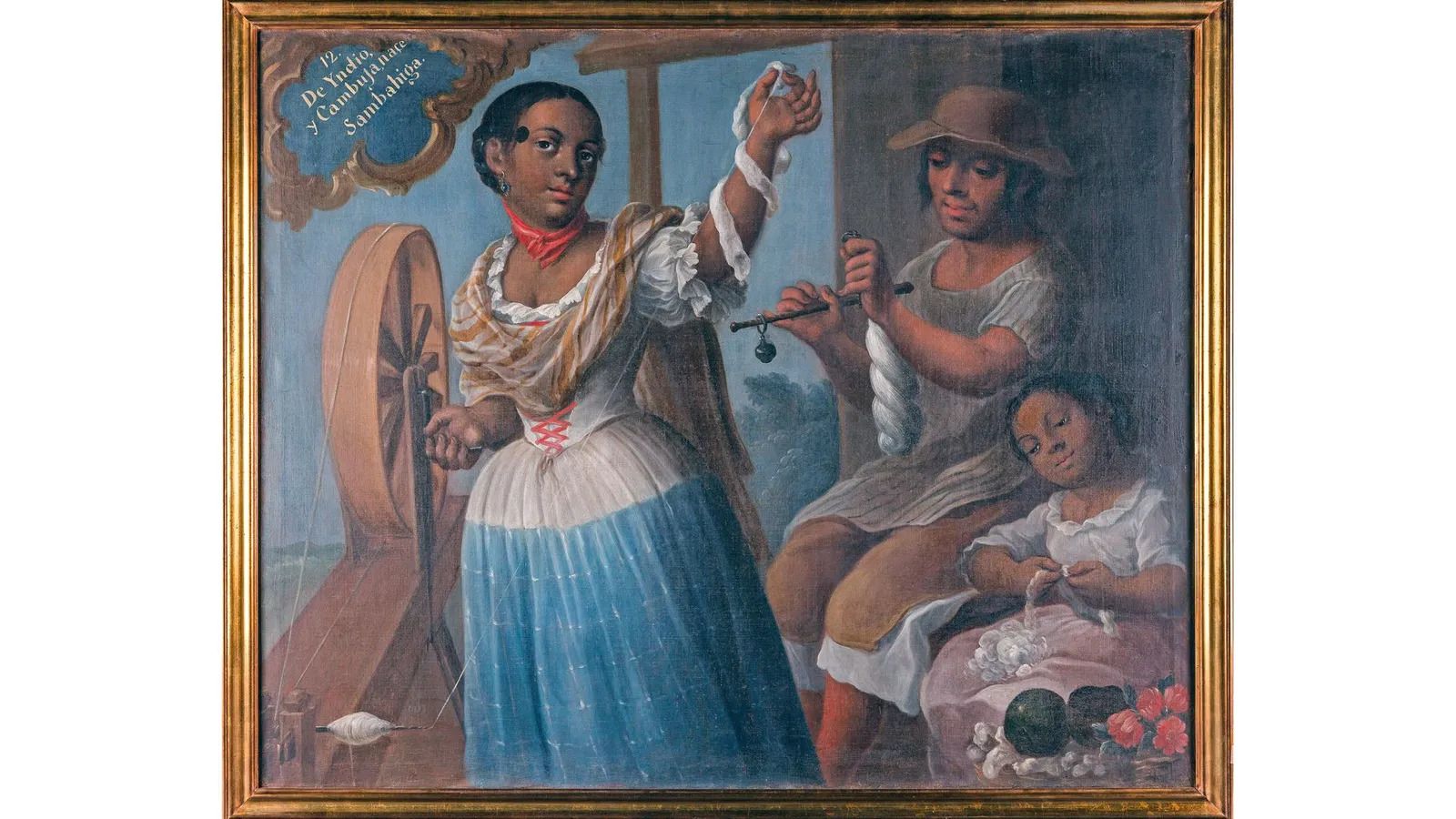 The subjects of the paintings are dressed in the clothing they were permitted to wear according to their place in the hierarchy, a restriction intended to exert both social and economic control on the population. The black couple and child depicted in Negros Bozales de Guinea wear rough, simple garments showing that they are enslaved. In contrast, the black woman shown with her Spanish husband in Negra de Guinea o Criolla. Español. Producen. Mulatos wears clothing similar to that of the elite, an indication of the higher status that marriage to a Spaniard gives her.

Unsurprisingly, the idea of looking at images that were designed to categorise and rank individuals according to their race is troubling to many. However, if we take time to understand how and why they were produced, and how the ideal depicted so often differed from the reality, it reveals an altogether more nuanced picture of the society in which they were created.

"People shared the same urban space. It is important to understand how colonial Latin America differed in this respect," says Granados. "The fact that, despite the regulations, people lived together is what allowed for this combination of traditions. It allowed for social mobility and the crown needed to control that." That need for control by the authorities can arguably be seen as a sign of their anxiety, and also a realisation that their ideal was never going to exist in the way they wanted or intended it to. 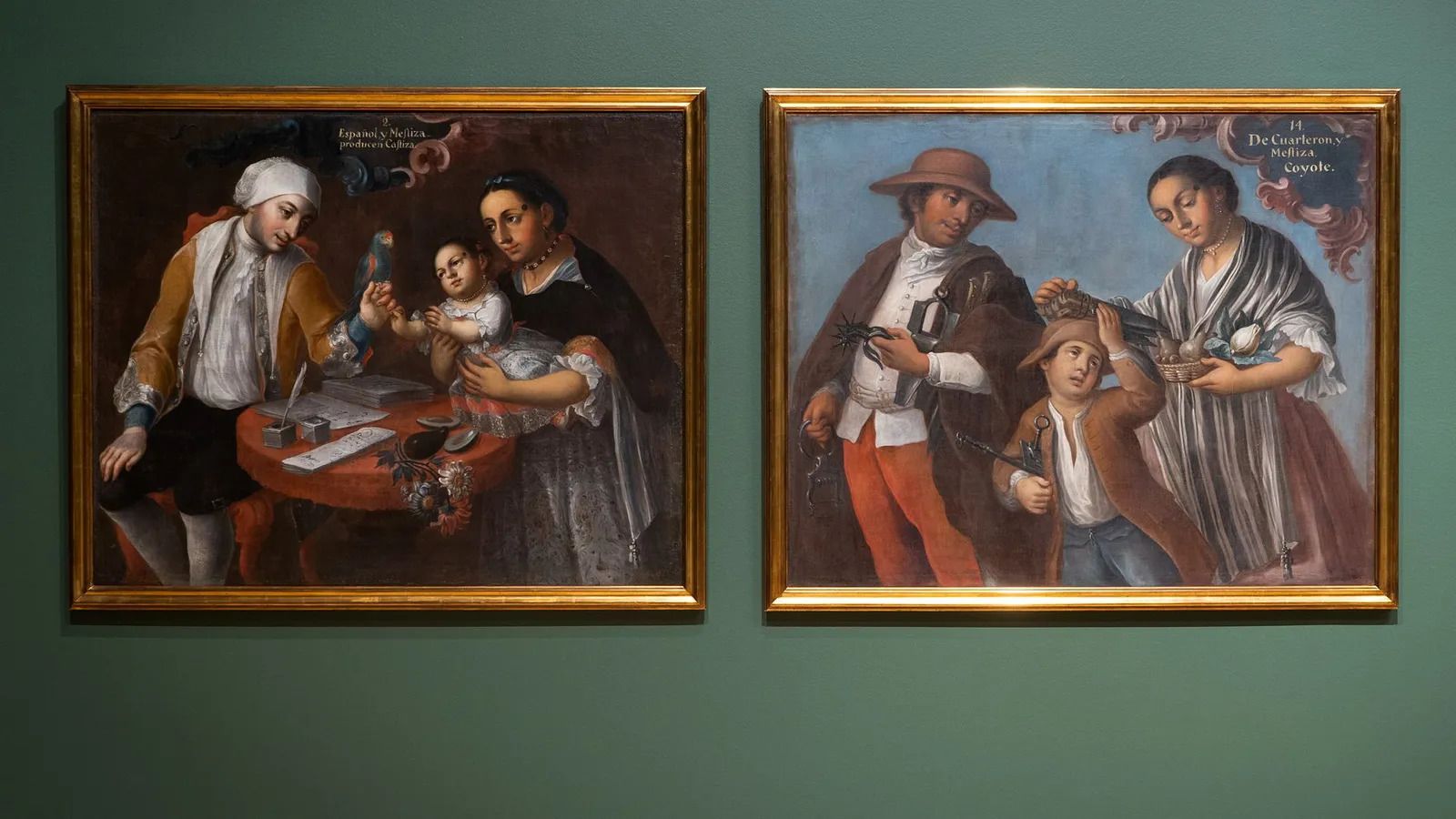 The artworks are featured in the exhibition Painted Cloth: Fashion and Ritual in Colonial Latin America

"Controlling how people appear really becomes an issue in the 17th Century as the demographics increasingly change – in other words the population becomes increasingly racially mixed. And so controlling appearance is also a way to signal something that is at the core of Spanish colonial society, which is 'purity' of blood. 'Purity' of blood becomes associated with being Spanish," explains Susan Deans-Smith, professor of history at the University of Texas at Austin and an expert on Casta painting.

So concerned were the Spanish about the mixing of races that in 1776 they issued legislation clamping down on mixed-race marriages. "Throughout the colonial period there are these flashpoints that help us understand when Spanish anxieties emerge," says Deans-Smith.

The painting Gente Blanca o Quasi limpios de su origen, which translates as White People or Almost Pure of Origin, highlights the ideal. A white man in elegant attire gazes approvingly at his pale wife, dressed in equally fine clothing while gesturing at the enslaved black person standing before them, no doubt to emphasise that they are at polar ends of the hierarchy.

However, the reality of this "ideal" is challenged when we understand that members of the indigenous elite were also permitted to wear fine Spanish clothing, although that right was occasionally challenged by members of the Spanish authorities. And as Granados points out, not all indigenous people would have wanted to wear Spanish clothing, even if they had been given the opportunity. In fact, many used the rigid rules and regulations firmly to their advantage, running rings around the Spanish elite in the process. 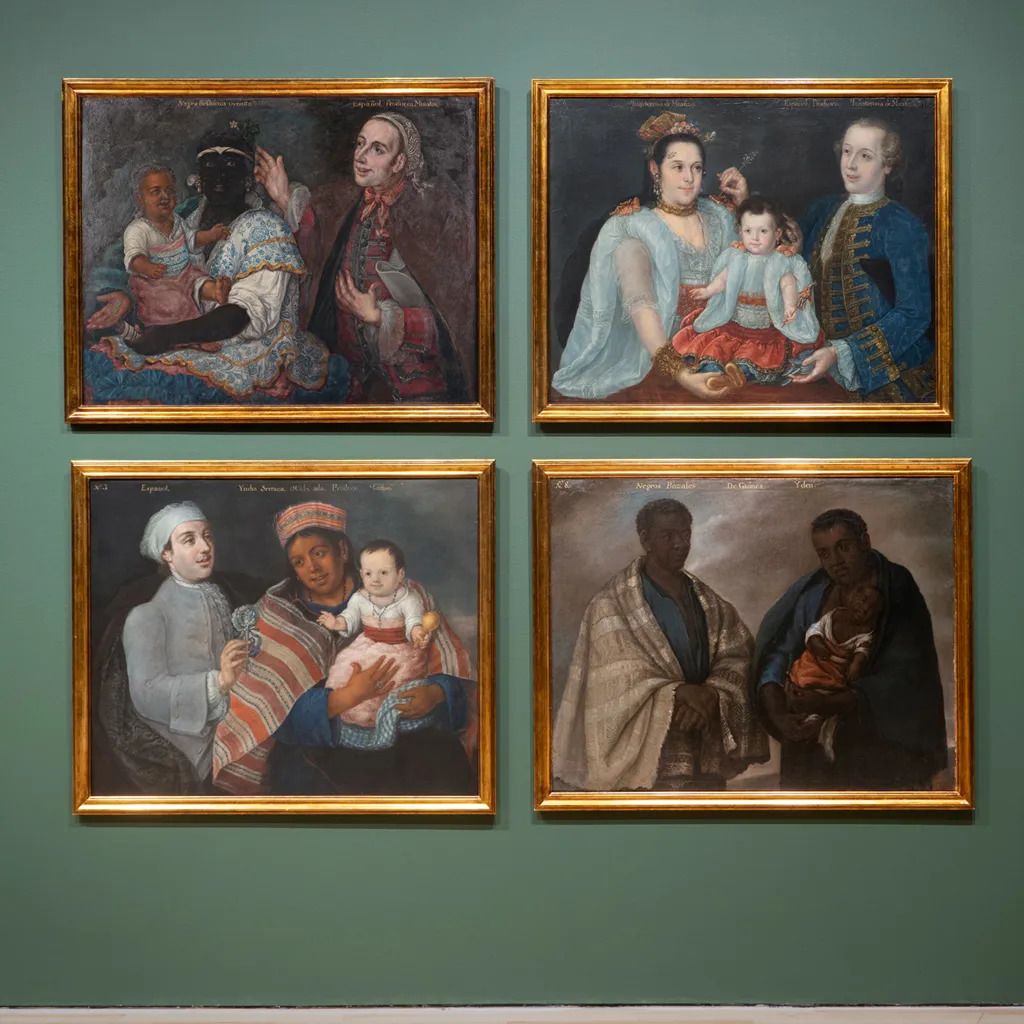 The exhibition provides an insight into the Casta system of the time, and is displayed at Blanton Museum of Art, Austin, Texas

"In paintings, it is very clear that indigenous taxpayers were identified by blue-and-white striped tunics, and had a very significant hairdo," explains Granados. By adapting other forms of dress that placed them in another racial group, people could avoid paying taxes. It was also a great benefit not to be Spanish if the Inquisition was in town, as it would mean immunity from prosecution. "They were able to choose when they wanted to be indigenous and when they didn't. What allowed them that fluidity was their clothing," says Granados.

Although the Casta paintings often seem to restrict their subjects to a position that was challenged in reality, certain paintings also appear to challenge the restrictions themselves. In De Lobo y Negra, Chino a bi-racial man is seen working as a tailor, a position that would theoretically have been denied him according to his race.

It is these complexities and contradictions – the veracity or not, of what they portray, and just as importantly what they don't portray – that make the Casta paintings such a uniquely valuable and fascinating historical source. And one that invites important, if often challenging, dialogue and debate today.

"What the Casta paintings ask us to do, and help us to do, is think about how forms of racial hierarchies, how forms of racial discrimination, come into play, what supports them, but also how complex they are," says Deans-Smith "It is this very fluidity that you can sense in the Casta paintings that really highlights the absurdity of creating racial hierarchies." 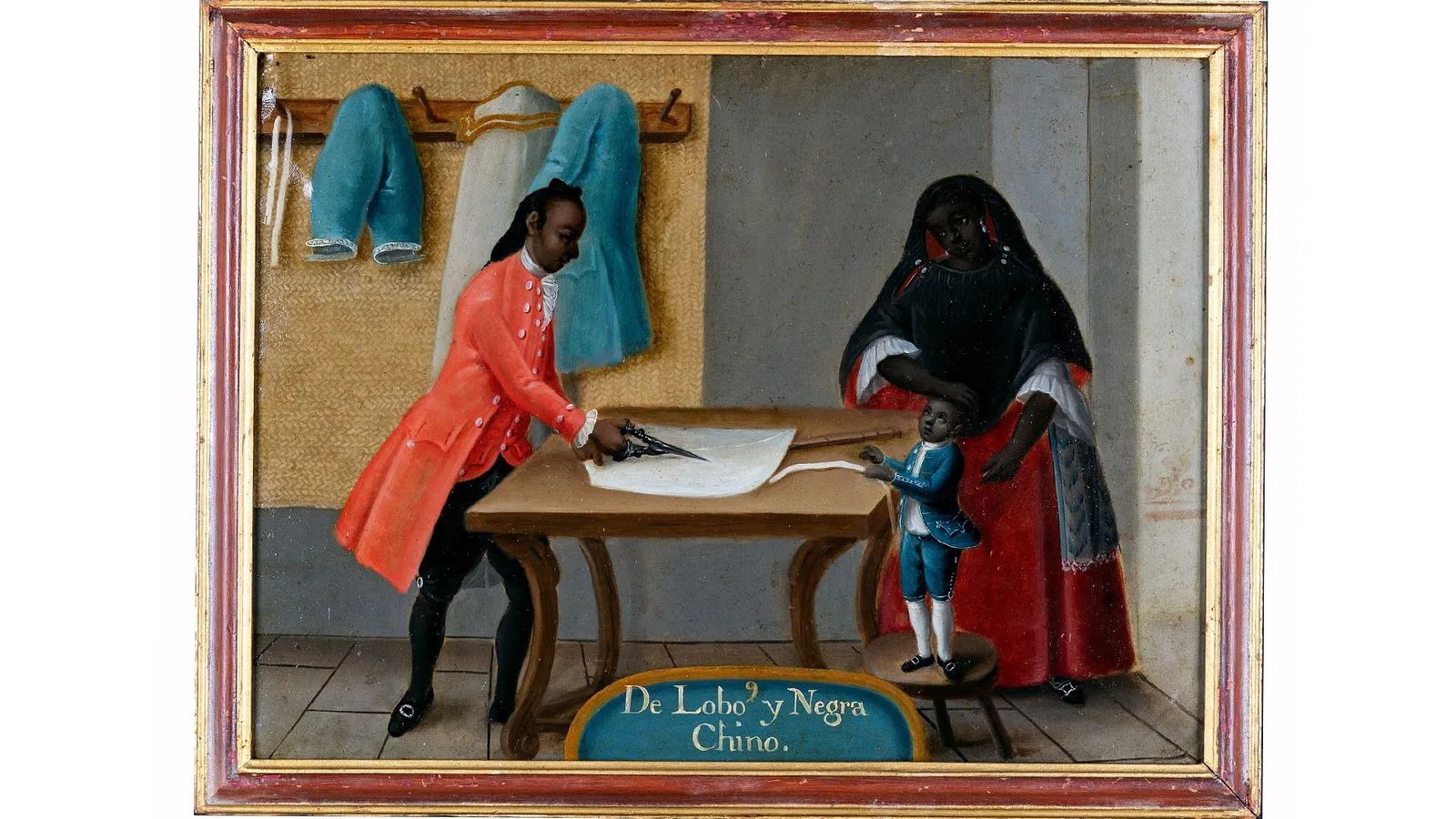 Although Granados agrees, she notes the issues that can arise from saying such a thing in the US. "In this country, if you say that race can be fluid it can be a very unrespectful thing to say, especially for the African-American community. But I was born and raised in Mexico, and my experience as someone of mixed race feels more fluid, but again, I am talking from that perspective, and I know for an indigenous person it is completely different."

It is wholly understandable that there will be different responses to the paintings, some positive, some negative. All are worth listening to. As Granados says, "These paintings allow us to have conversations about how difficult it is to reduce the human experience to a box – which in the end is telling us how complex identity is."