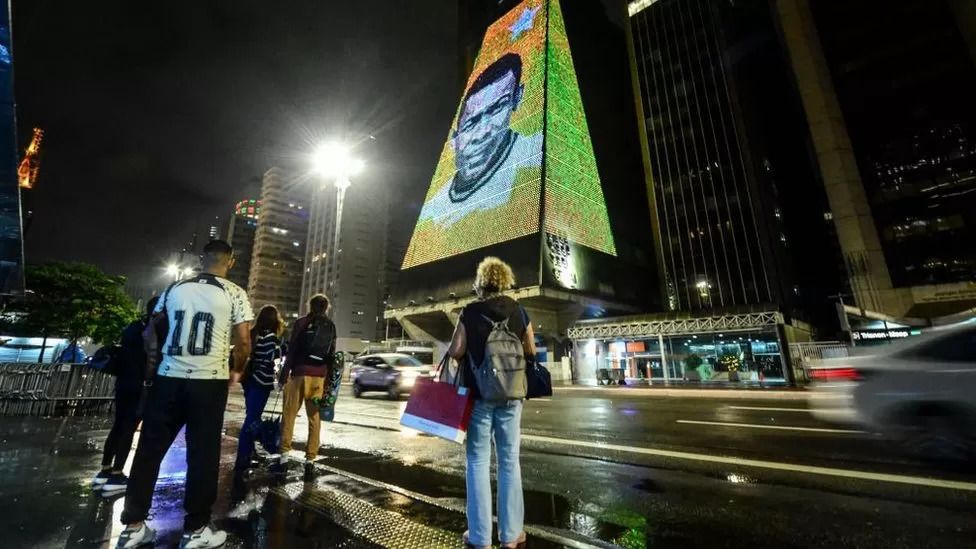 'Thank you, King': Brazil lights up in honour of Pelé

Brazil has woken up to its first day without footballing legend Pelé.

"The King", who won three World Cups and was widely considered the greatest footballer of all time, died at the age of 82 in São Paulo on Thursday.

Overnight, Pelé's face shone on buildings across the South American nation and landmarks were lit up in his memory. Fans took to the streets dressed in his iconic number 10 shirt.

The front pages in Brazil were all talking about Pelé on Friday. One read "Pelé died, if indeed Pelé can die", because for Brazilians, he is their eternal King.

The last time national mourning was declared was when Queen Elizabeth II died. Lots of parallels have been drawn between Pelé and royalty - he was the closest Brazil had.

Pelé had been undergoing treatment for colon cancer since 2021. Knowing his condition was worsening, Brazilians had spent weeks reflecting on his life and legacy.

Many feel relieved his suffering is over - but he is an iconic sportsman who will be dearly missed.

The hospital issued a statement confirming his death from multiple organ failure connected to his cancer.

But in a reflection of his status, the hospital added it shared the suffering felt by the family and everyone over the loss of "our beloved King of football".

One man, standing outside the Fiesp building in São Paulo as it displayed a colourful tribute, spoke of the intensity of feeling for Pelé.

"It is indescribable to say at this moment what we are going through here; the loss," Widisley Guimarães told Reuters news agency.

At São Paulo's Museum of Football, an exhibition was erected overnight to promote Brazil's beloved King, even putting on display the football shirt he wore in 1970 when he scored the first goal against Italy and Brazil ultimately won. That was his third World Cup title, cementing his status as footballing legend.

"For us, he's a national symbol who turned into an international symbol, who took our country to all corners of the world," said Romulo Rezende Dias, who had come to see the display with his wife and three children.

"Brazil may not have a monarchy, but in football we have our King." 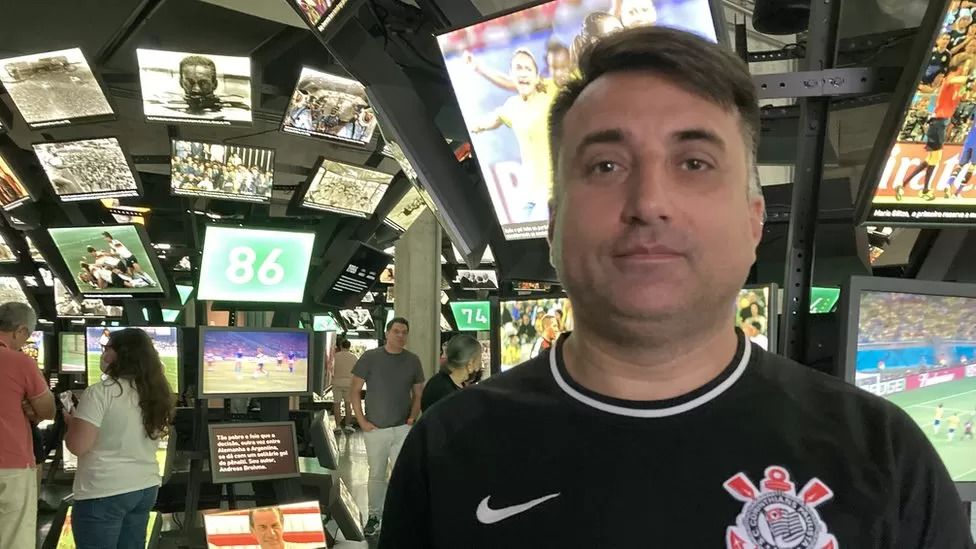 "Pelé and his legacy will be eternal. With the football he achieved in his era, imagine what he could have done with today's technology."

Tributes have poured in for him, including from Brazil forward Neymar, who said: "Before Pelé, football was only a sport.

"Pelé changed everything. He turned football into art, into entertainment. He gave a voice to the poor, to black people."

But he was a cultural icon, too.

As a black man, Pelé rose to the status of national treasure in a country with a deep history of slavery and legacy of segregation that persists.

He regularly faced monkey chants on the pitch and was called several racist nicknames. But Pelé once said that if he had stopped every game after a monkey taunt, he would have had to stop them all.

Pelé was key to carving out space and recognition for black people in Brazilian football, his biographer Angelica Basthi has said, but he was never directly involved in the fight against racism.

While national mourning will last for three days, São Paulo state authorities have said their period of mourning will go on for a week. But really, Brazilians will mourn for much longer.

Pelé's wake will be held on Monday at the Santos Football club - for many years, his home stadium.

The following day, his coffin will be carried through the streets of the coastal city of Santos, before a private burial.

This weekend was expected to be momentous in Brazil as Luiz Inácio Lula da Silva - whose swearing in takes place on Sunday - returns to the presidency, 20 years after the start of his first term in office.

Instead, Brazilians will be paying tribute to a man who transcended politics - a man who represented this entire footballing nation. 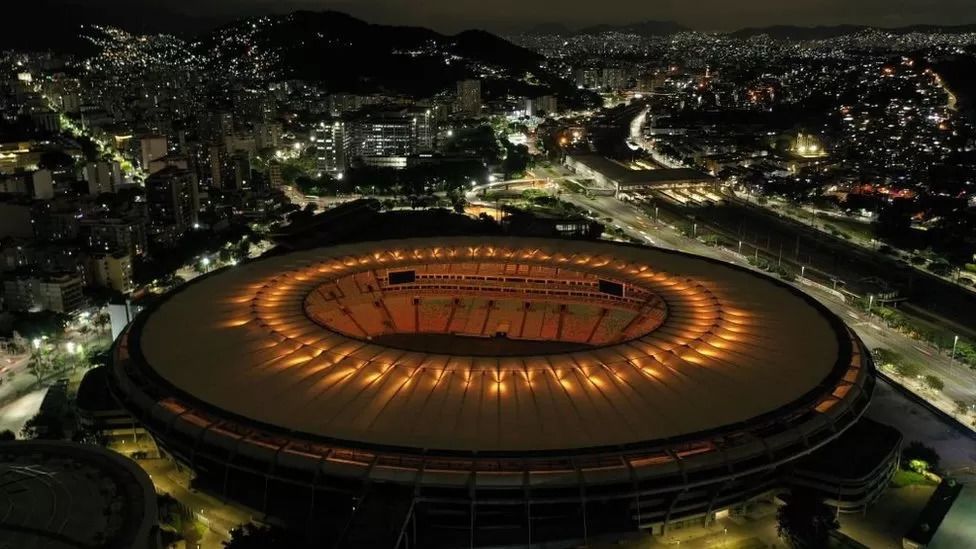 The Maracanã stadium in Rio de Janeiro - where Pelé scored the 1,000th goal of his career - was lit in gold in tribute 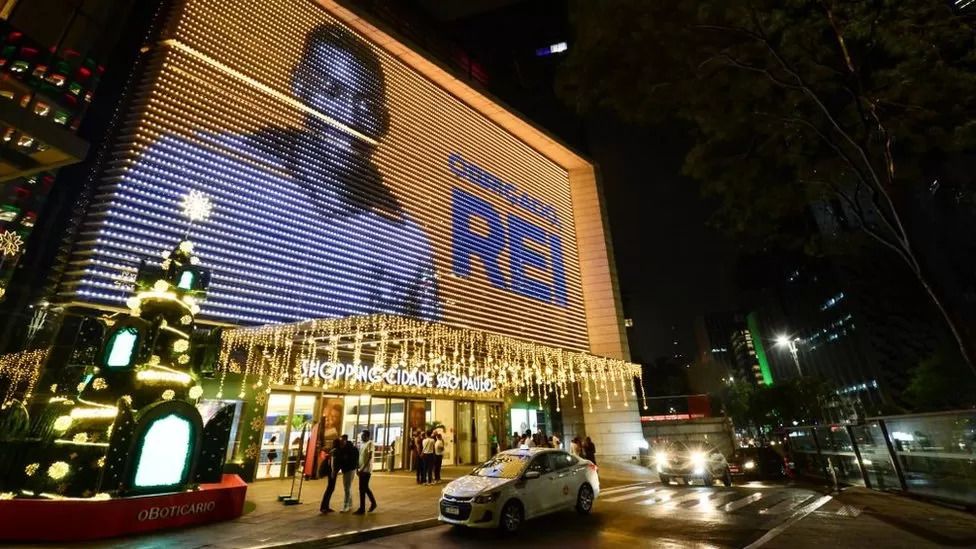 An image of Pelé was displayed on the facade of a shopping centre in São Paulo with the caption: "Thank you, King" 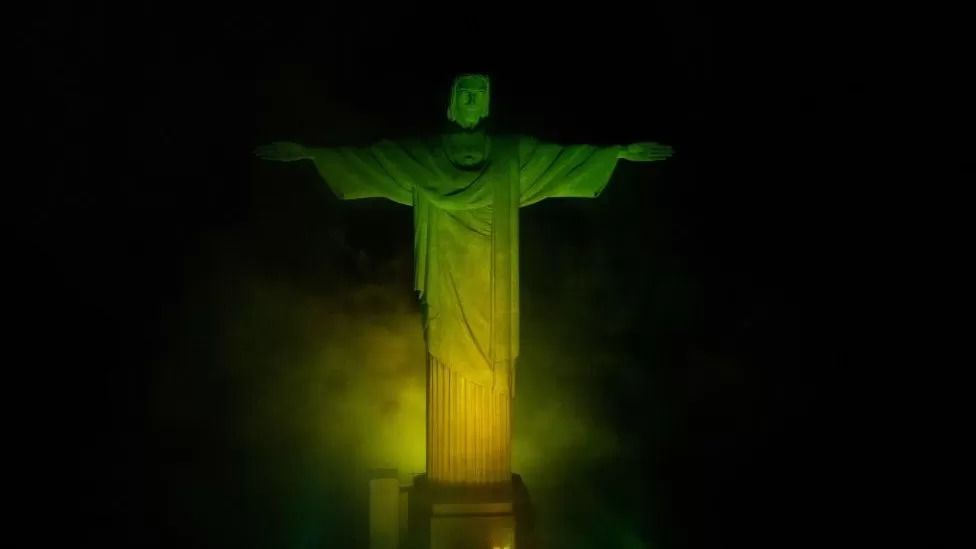