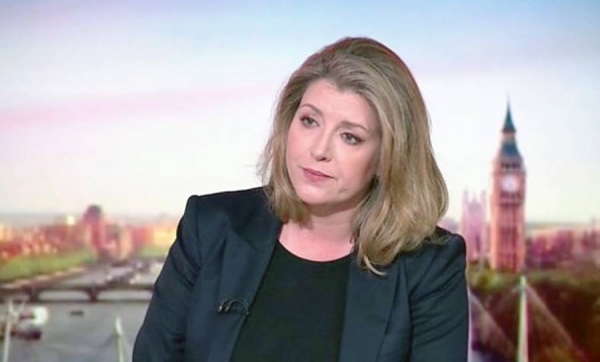 Conservative leadership hopeful Penny Mordaunt has called for an end to toxic politics, saying the focus needs to be on picking a new prime minister.
She told the BBC there were a "number of smears going on in the papers" and hit back at claims that she had ever backed gender self-identification.

Mordaunt is one of five candidates left in the leadership race, ahead of the next round of voting on Monday.

Mordaunt — second in the contest according to the latest round of MPs' votes — told the Sunday Morning program the cost-of-living crisis was her priority.

She was also questioned about her stance on how people should be allowed to legally change their gender, after questions were raised during the contest about her record when she was equalities minister.

Asked by Sophie Raworth whether she thought trans people should have to get a medical diagnosis of gender dysphoria before they could legally change their gender, she said: "Yes."

It came after the Sunday Times said it had seen government papers which appeared to suggest Mordaunt had been in favor of removing at least one element of the medical process required for transgender people to legally transition.

"We all know what's going on. This is the type of toxic politics that people want to get away from," she said.

"The poor British public have a month of this to go, they've got a month of us choosing our prime minister. It's an opportunity for our party to show ourselves at our best. We should be talking and focusing on the issues that concern them."

She said while she was equalities minister "we didn't actually... produce a policy", but her role was to manage a consultation, asking healthcare professionals what they thought of the system.

"My colleagues are very angry and upset that this is how the leadership contest is being dragged down."

Her comments followed her first TV leadership debate on Friday where she clashed with fellow candidates Kemi Badenoch and Liz Truss as they claimed she had backed a change in the rules to allow self-identification.

MP Lee Rowley asked whether Mordaunt had agreed with self-ID but "is now saying that she didn't".

Suella Braverman — who also ran for the leadership but has been knocked out — told Times Radio she thought Mordaunt was "woke" — and she disagreed with her views on "trans ideology".

Woke is an informal term from the US, meaning alert to injustice and discrimination in society, but it is often used in a derogatory way to criticize someone for a certain set of views.

Mordaunt said she would not set out detailed tax and spending plans at this stage, saying the contest was the "wrong place to do it".

But she said she planned to halve VAT on petrol and raise tax thresholds — saying they represented a "modest" set of changes to help people who are struggling.

She said the fuel VAT plan would be cost-neutral, something Deputy Prime Minister Dominic Raab questioned on Sky News, saying he was not sure such suggestions were "particularly credible".

Mordaunt acknowledged that her plans to cut taxes would lead to increased government borrowing to fund day-to-day spending, saying: "We will have to do that for some time. The important thing is that debt (to GDP) ratio will fall over time."

Tugendhat — the last-placed contender among MPs and the only one not to have held a ministerial post under Boris Johnson — said he would cut fuel duty by 10p.

It comes after ex-Chancellor Rishi Sunak, who is currently the frontrunner in the race, said inflation was the "number one economic priority" but after that he would introduce tax cuts.

Speaking on Sky News, former Conservative leader Sir Iain Duncan Smith appealed for all the candidates in the leadership race to be judged on their record and achievements.

"The one person I don't know what her big achievements are is Penny [Mordaunt]," he said. "I don't have any problem with her, I have no issues at all.

"But for me the key thing is we're not electing a leader of the Conservative Party that has two years to build their reputation, we are electing someone who will be prime minister on day one."

He said questions should be asked of candidates about their achievements in government, their beliefs and tough decisions they have had to take.
#Boris Johnson  #Dominic Raab  #Johnson  #Raab
Add Comment