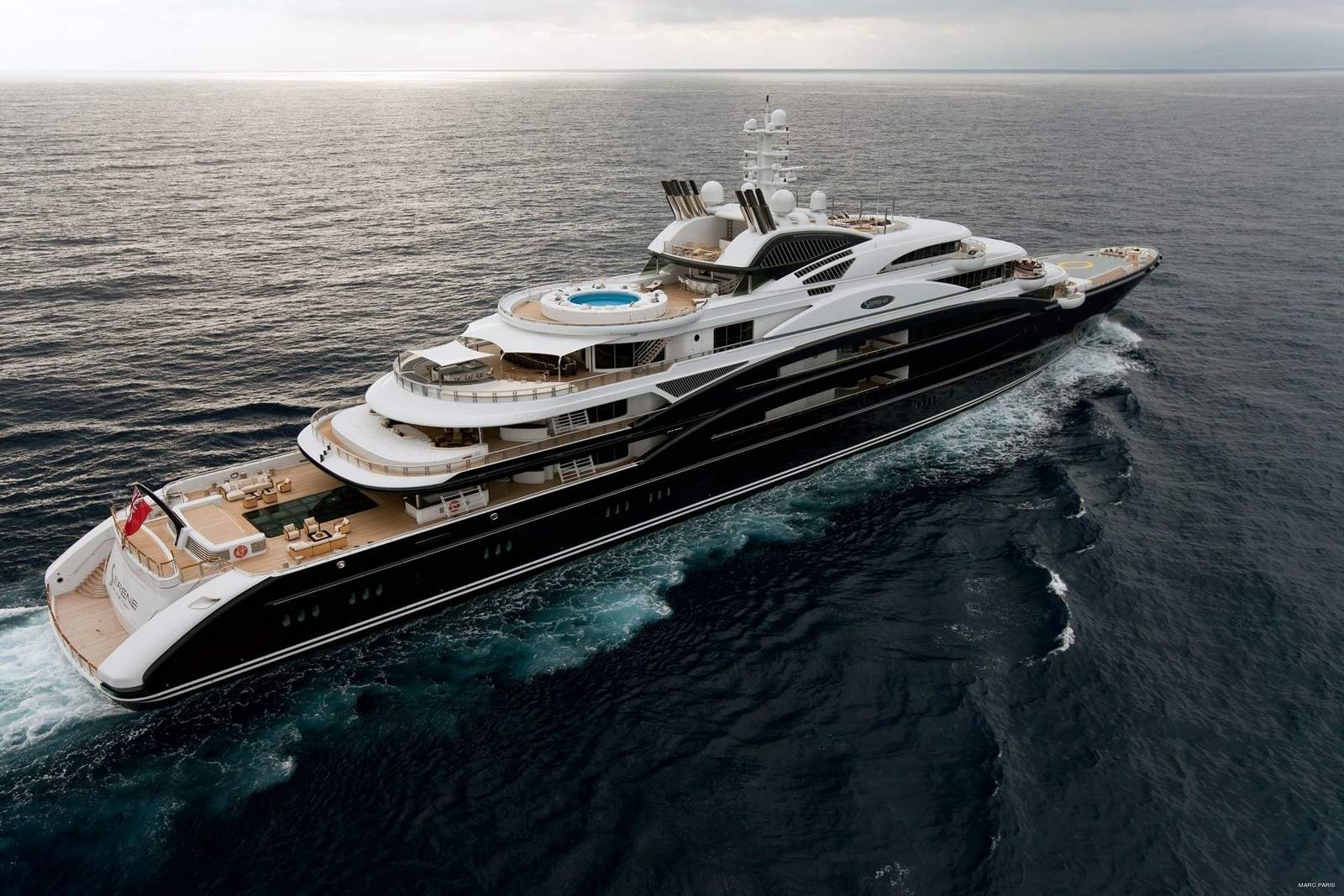 Saudi prince MBS bought this $400 million megayacht from a Russian Oligarch and immediately kicked him out. The 439 feet long vessel has two helipads, a submarine, and a nightclub. The royal has also hung a $450M painting in it.

Serene, the $400 million superyacht initially owned by Russian oligarch Yuri Shefler, then by Prince Mohammed bin Salman, and chartered by Bill Gates, is a marvelous creation worth every praise coming its way. The vessel has iconic names attached to it, but it is not the owner that makes this ship. Instead, it is the sheer grandeur of the goliath that complements the stature of its owners. 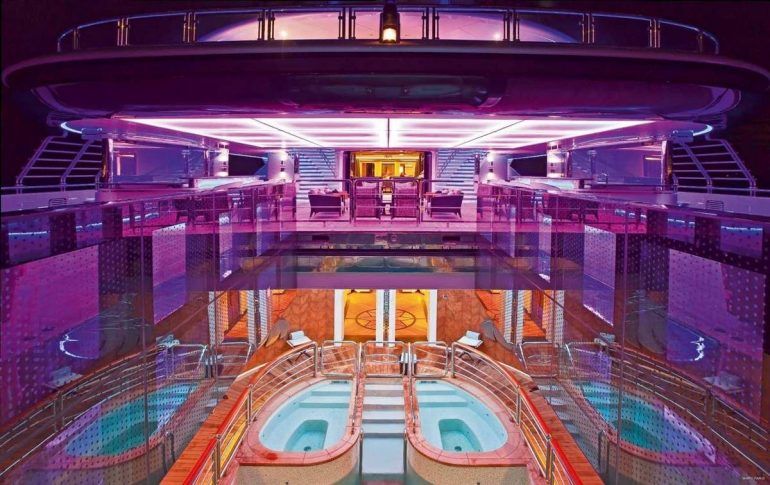 According to Forbes, serene was the first superyacht built by Italy’s Fincantieri yard and once featured among the world’s three biggest yachts. At 439 feet, it fell behind Roman Abramovich’s 550- feet long Eclipse and steel tycoon Viktor Rashikov’s 459-feet Ocean Victory. Let’s take a closer look at the charm of the Serene superyacht and how it enticed the man who has everything, the Saudi prince: 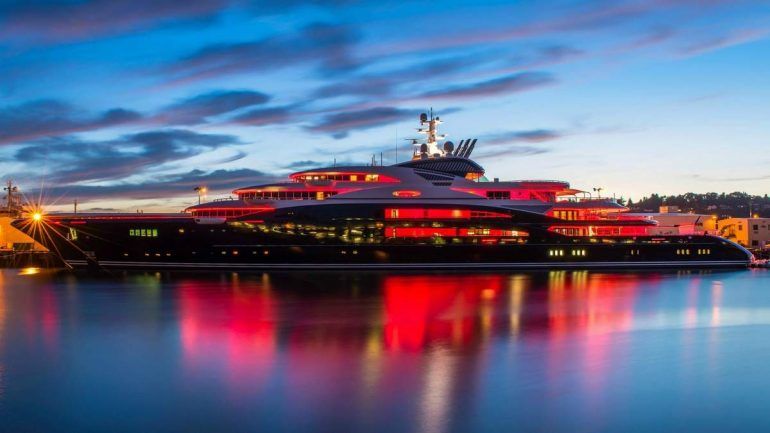 Serene, owned by Mohammed bin Salman, Saudi Arabia’s deputy crown prince, may not be the largest yacht in the world. When it comes to striking features and a seemingly endless list of amenities, Serene is a vessel that is tough to beat. With a massive beam of 60 feet, the ship boasts seven decks and 4,500 square meters of interior space designed by Pascale Reymond of Reymond Langton Design. 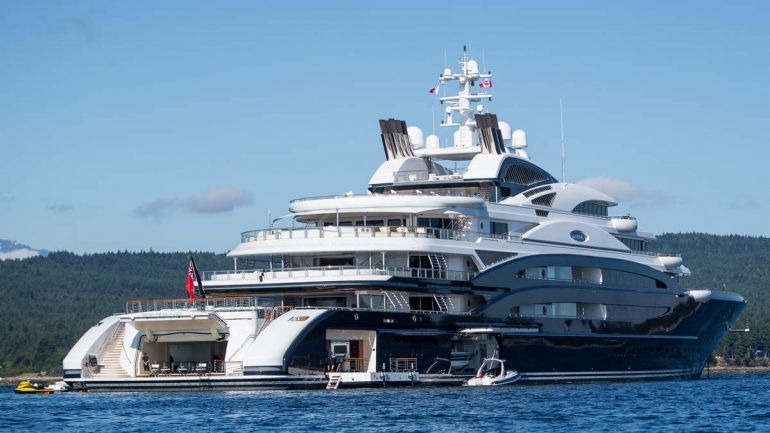 Made in 2011, Serene comprises a steel hull and aluminum superstructure. Its USP is numerous amenities and luxuries that are hard to find. This aspect has attracted the wealthiest of the world. Paul Ashton, the editor of SuperYacht World, said: ‘The interior is a closely guarded secret, as is often the case with the very private yachts at the top end. But it is the work of Reymond Langton, who is one of the most exclusive design teams in the world, so it will be breathtaking.” 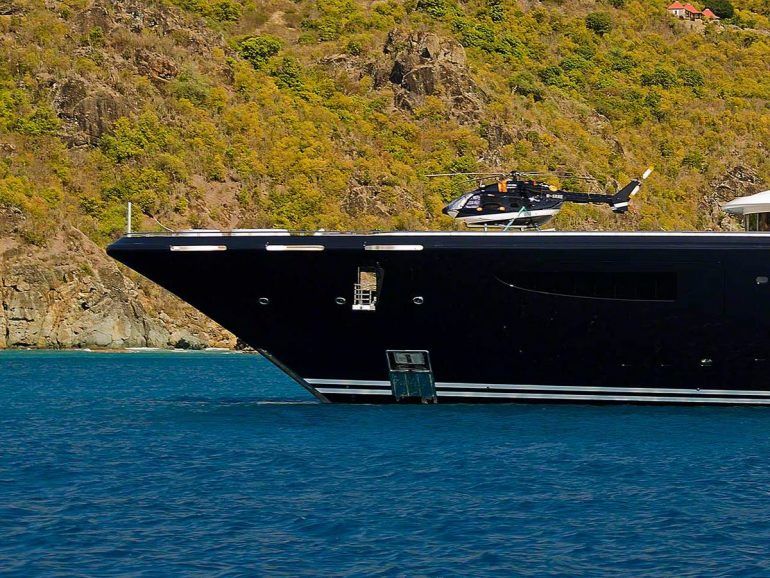 He added, ‘A yacht like this is not really like anything else – a company or a football club and even property is there to make money – a big yacht will only cost money.’ Pretty sure the costing money part is accurate as Serene comes with a giant internal seawater pool, and if that wasn’t enough, one of the two helipads converts to yet another pool or dance floor. 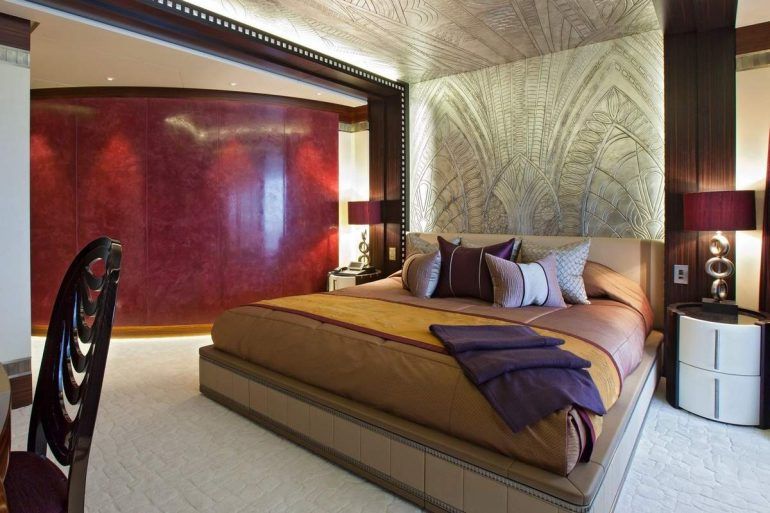 The lavish owner’s suite is a stately double cabin with a private swim platform and private lift. In addition, 12 elegant cabins accommodate 24 guests who can also hop into the yacht’s submarine to explore the world below. The more you learn about the onboard amenities, the more Serene seems like the perfect yacht to charter for a family. 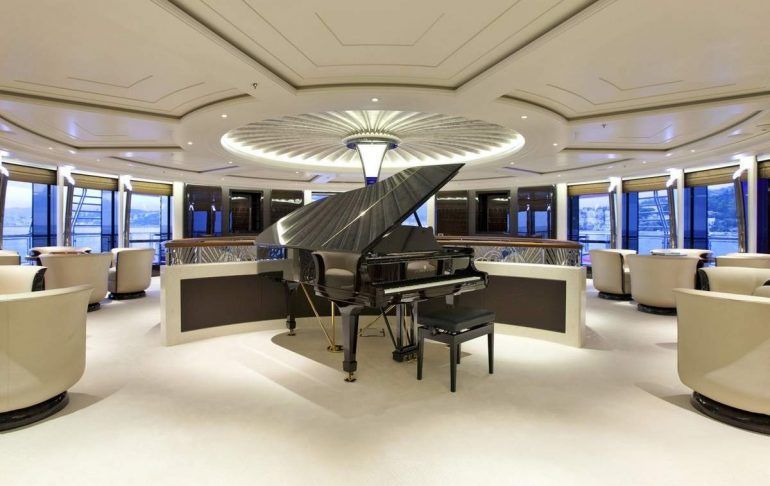 There is much to do from an uncommon snow room, several children’s playrooms, a climbing wall between the decks’ slides, and an exciting underwater viewing room. 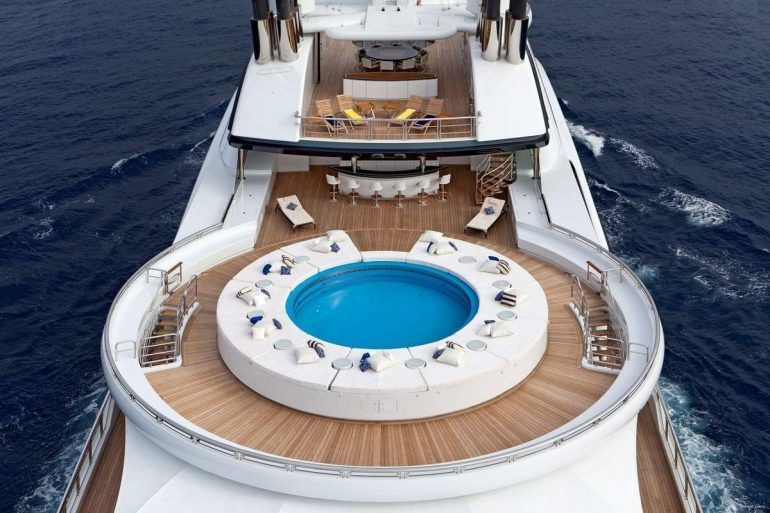 Adults too will be kept occupied enjoying a classic in the outdoor cinema, while music and conversations take place in the piano room and bar. The wellness and beauty center is the best spot, outfitted with spas, hammams, and more to unwind and relax. The award-winning Serene flaunts a private beach club with a sheltered sunbathing area. 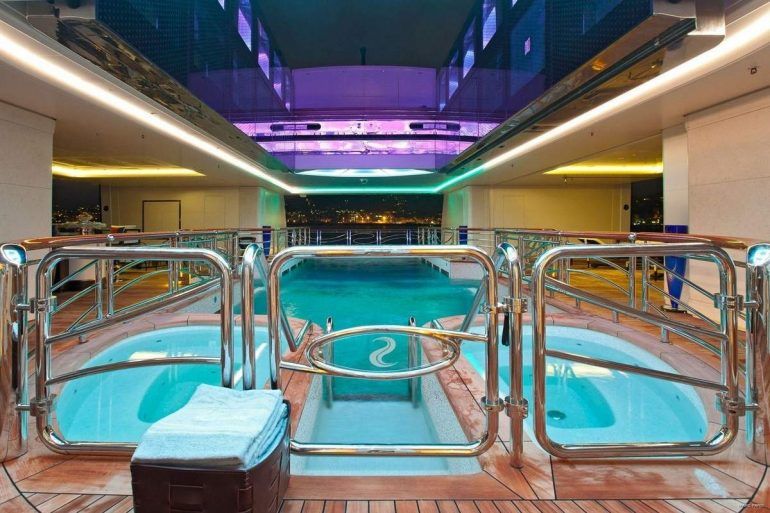 There are also two Jacuzzis and a sundeck dance floor. Most will fall for the ship’s observational deck, a fully stocked wet bar with extra sun loungers. The yacht that has everything cant be complete without an exhaustive collection of tenders and toys. No wonder even one of the richest men globally, Bill Gates, couldn’t resist its charms and chartered the Serene superyacht for an estimated $5 million per week in 2014. The family enjoyed a week together on the yacht just off the coast of Porto Cervo, Sardinia. 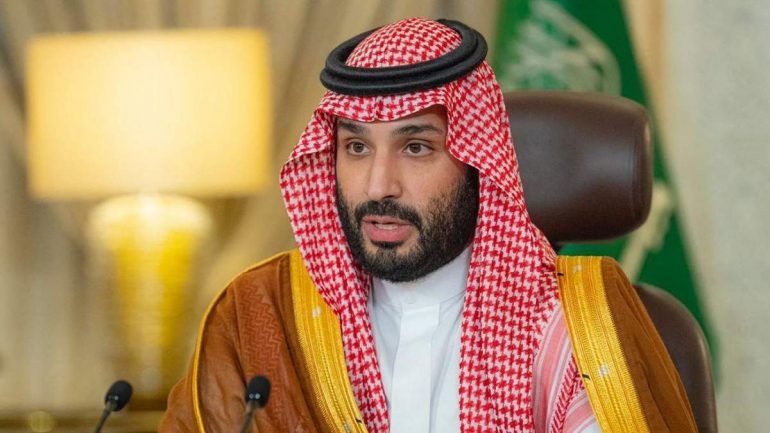 Speaking of the Serene charm, so taken was the Saudi prince by this superb megayacht that he kicked its Russian oligarch owner off the $400 million yacht immediately after buying it. While on holiday in the south of France, the Saudi prince leveled up the meaning of holiday shopping after spotting this luxury vessel and wasted no time acquiring it. 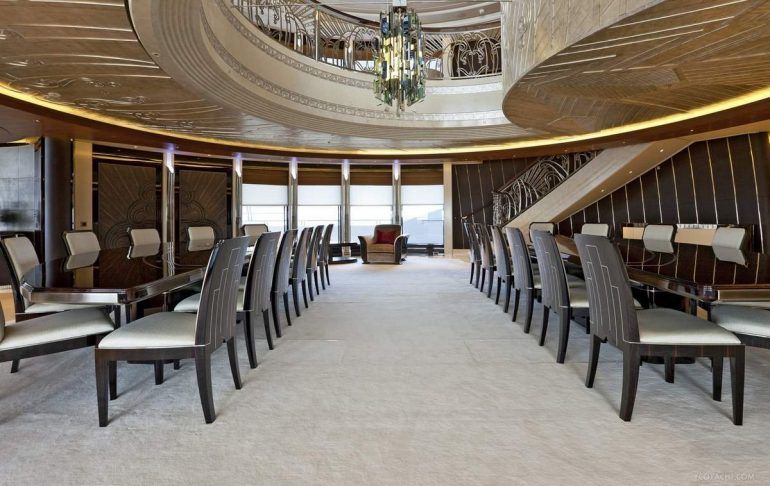 According to the New York Times, he dispatched an aide to buy the ship, and the deal was supposedly done within hours, with Mr. Yuri Shefler moving out of the yacht on the same day. Billionaire businessman Yuri Shefler is the owner of SPI Group, an international consortium that sells alcohol in 160 countries, most notably the Stolichnaya vodka brand. As of March 2022, his net worth was estimated at $1.5 billion. 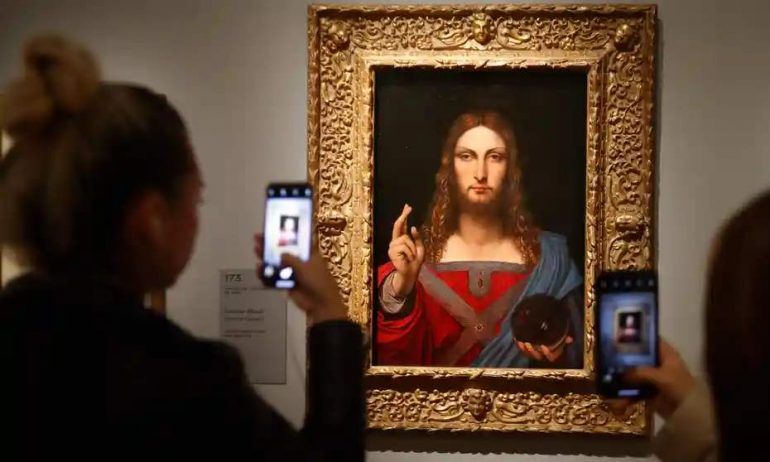 As per CNBC, Mohammed bin Salman enjoys a family net worth of over $1 trillion. It is expected he owns a lavish superyacht that will give palaces on and a run for their money. But the sparkle goes beyond the vessel and her umpteen amenities. Inside Serene, one will find the world’s most expensive painting, Leonardo da Vinci’s Salvator Mundi, purchased for almost half a billion dollars in 2017 (that’s more expensive than the yacht itself).

For the longest time, the whereabouts of this Leonardo Da Vinci masterpiece were a mystery. According to Al Jazeera, Mohammed bin Salman reportedly brought the painting and hung it on a cabin wall on the superyacht Serene. Both purchases together amount to over $1 billion. The painting meant to grace the Louvre Museum in Abu Dhabi never showed up at the scheduled events. This left people perplexed and wondering about the whereabouts of the expensive painting. All except one!