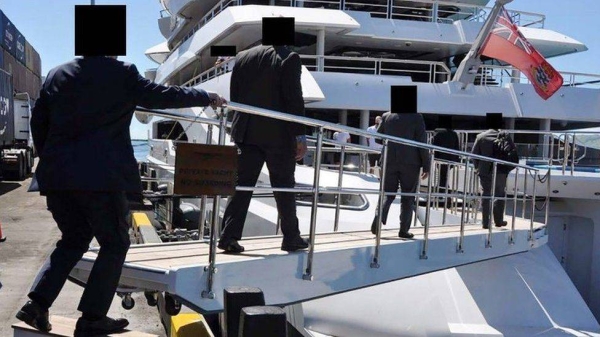 Russian superyacht ordered to leave Fiji on US warrant

A Russian-owned superyacht that allegedly sailed to Fiji to escape seizure has been taken away to the US after a court upheld a FBI warrant.
US police had for months been tracking the 106m (350ft) Amadea — linked to sanctioned oligarch Suleiman Kerimov.

Agents had boarded the boat upon its arrival in Fiji in April, but the boat's owner had launched a legal battle to stop the seizure.

They had argued the warrant contravened the Pacific island's local law.

However, on Tuesday, Fiji's Supreme Court dismissed that argument and ordered the boat's removal, pointing out the giant yacht's docking in the port of Lautoka had cost the local government "dearly".

US authorities in their submission had argued that the $300m (£238m) boat was estimated to cost about $25-30m to keep running per year.

For the public benefit, it was better for the boat to be removed, Chief Justice Kamal Kumar said.

He found the vessel had sailed into Fiji waters "without any permit and most probably to evade prosecution by the United States".

The defense team for the boat's registered owners, Millemarin Investments, had argued the boat was not the property of Kerimov's and instead belonged to another Russian businessman, who is not facing sanctions.

But US authorities allege that Kerimov still has a beneficial connection to the boat.

The FBI alleged the boat had also tried to escape detection "almost immediately" after the war began by turning off its automated tracking system.

US authorities first sanctioned Kerimov in 2018 over a slew of money-laundering charges. The Russian has been sanctioned by other nations since, including by the EU block after Russia's invasion of Ukraine.

The court accepted the validity of the US warrant and agreed that issues concerning money laundering and ownership need to be decided in the court of original jurisdiction," said Christopher Pryde.

Western authorities have stepped up a crackdown on the assets of dozens of Russian oligarchs in the wake of the Ukraine invasion in February.
Add Comment