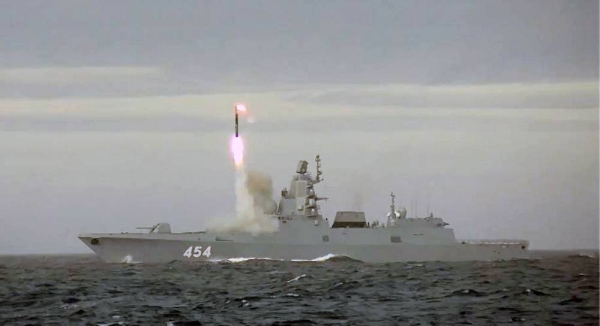 The Russian navy on Saturday conducted another test of a prospective hypersonic missile — a demonstration of the military's long-range strike capability amid the fighting in Ukraine.
The Defense Ministry said the Adm. Gorshkov frigate of the Northern Fleet in the White Sea launched the Zircon cruise missile in the Barents Sea, successfully hitting a practice target in the White Sea about 1,000 kilometers away.

The launch was the latest in a series of tests of Zircon, which is set to enter service later this year.

Earlier tests led experts to believe that the range of the rocket was between 250-500 kilometers, but the latest test doubled that.

Russian President Vladimir Putin has emphasized that its deployment will significantly boost the capability of Russia's military.

Zircon, which can purportedly fly at Mach 9 or nine times the speed of sound, is intended to arm Russian cruisers, frigates and submarines and could be used against both enemy ships and ground targets.

It is one of several hypersonic missiles under development in Russia. Last month, the Kremlin test-launched another new missile, the Sarmat, capable of carrying 10 or more nuclear warheads and reaching the US.

Russian officials have boasted about Zircon's capability, saying that it's impossible to intercept with existing anti-missile systems due to the "plasma shield" it creates while flying, making it practically invisible to active radar systems.

Putin, who has sternly warned Western allies against interfering in Ukraine, has said that Russian warships armed with Zircon would allow Russia to strike "decision-making centers" within minutes if deployed in neutral waters.
Add Comment