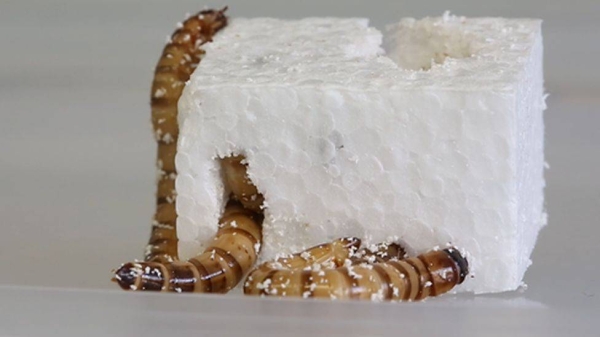 A species of insect larvae with a taste for plastic could help revolutionize recycling, researchers say.
Australian scientists have found the Zophobas morio — commonly known as a superworm — can survive on a diet of polystyrene.

They believe the beetle larvae digest the plastic through a gut enzyme.

That could be significant for advancements in recycling, says one of the study's authors.

"Superworms are like mini recycling plants, shredding the polystyrene with their mouths and then feeding it to the bacteria in their gut," Dr Chris Rinke said.

The University of Queensland team fed three groups of superworms different diets over three weeks. The batch that ate polystyrene even put on weight.

The team found several enzymes in the superworm's gut have the ability to degrade polystyrene and styrene. Both are common in takeaway containers and other items such as insulation and car parts.

But the research is unlikely to lead to massive worm farms that double as recycling plants.

Instead, they hope to identify which enzyme is the most effective so it can be reproduced at scale for recycling.

Plastic would then be mechanically shredded, before being treated with the enzyme, said the research published in Microbial Genomics.

"The breakdown products from this reaction can then be used by other microbes to create high-value compounds such as bioplastics," Dr Rinke said.

Research has previously shown some types of beetle larvae can consume polystyrene.

But this study takes it a step further, says Australian National University researcher Colin Jackson - who wasn't involved with the study.

"This study goes a long way towards understanding how the bacteria in [the superworms'] gut do this at the molecular level," Professor Jackson told the Australian Broadcasting Corporation.

"[That's] important for translation and use of this type of approach in recycling."

Internationally, other researchers have had success in using bacteria and fungi to break down plastics.

But some question whether such techniques will ever be commercially viable.

"The scale-up and translation of research like this is always a challenge, which is magnified in the area of plastics by the incredible scale of the problem and the economics in terms of how cheap new plastic is to produce," Professor Jackson said.
Add Comment