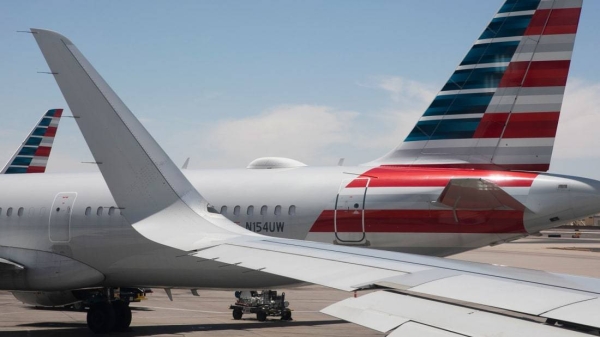 A New York City woman was recently sentenced to four months in prison for interference with flight crew members, according to a Department of Justice news release.
Kelly Pichardo had previously pleaded guilty to the charge, which is a Class C felony offense. Pichardo also received 36 months of supervised release and was ordered to pay $9,123 restitution to American Airlines, the department said in the release.The sentence was imposed on August 29, according to court documents.

"Unruly and intimidating behavior," the release says, by Pichardo and her co-defendant on a February 2021 American Airlines flight from Dallas to Los Angeles prompted the flight to reroute to Phoenix so that the two could be removed from the plane. They were traveling in first class.

Ana Laura Botello, an attorney for Pichardo, declined to comment on the sentencing.

The co-defendant, Leeza S. Rodriguez, is scheduled to be sentenced in November "pursuant to her guilty plea," the department said.

"There is a line between boorish behavior on an airplane and criminal activity, and the defendant clearly crossed it," said US Attorney Gary Restaino in the news release. "First class passengers are not immune from prosecution."The Association of Professional Flight Attendants, a union representing more than 20,000 American Airlines flight attendants, said the violent behavior displayed on the flight diverted to Phoenix "must stop."

"APFA will continue collaborating with other flight attendant and customer service agent unions, the Department of Transportation, the Federal Aviation Administration, and Congress to ensure these offenders are prosecuted to the full extent of the law with appropriate fines and criminal penalties," said Julie Hedrick, the union's national president, in a statement provided to CNN.

The maximum fine for the violation of the Class C felony is $250,000, with a maximum prison term of 20 years.

A record year for unruly passenger behavior, 2021 ended with nearly 6,000 reports to the Federal Aviation Administration.

More than 1,100 investigations and 350 enforcement actions were initiated.

The Federal Bureau of Investigation, with assistance from the Phoenix Police Department, conducted the investigation of the incident involving Pichardo.

At the end of 2021, the Justice Department vowed to prioritize the prosecution of crimes on commercial airplanes.
Add Comment