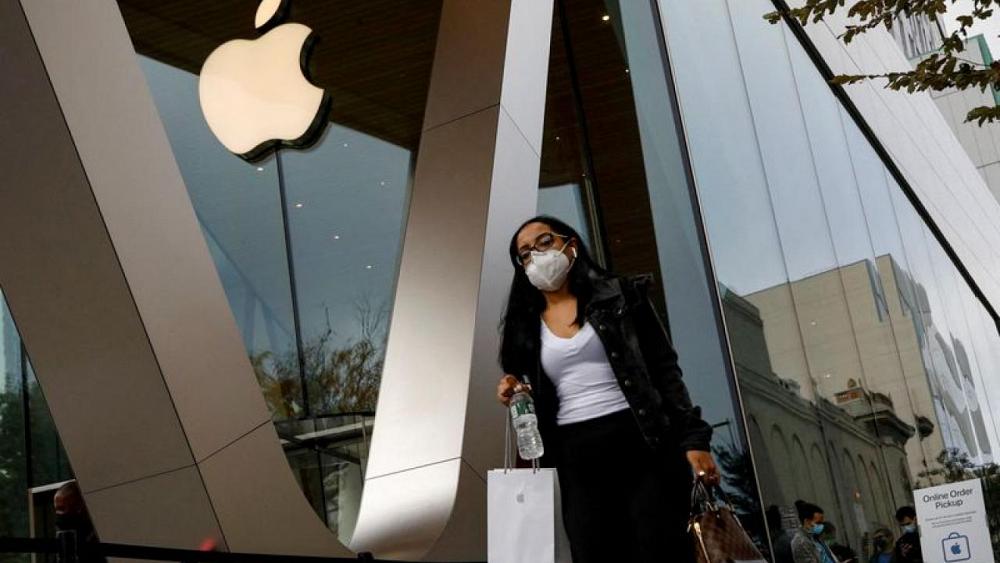 Is Apple really worth $3 trillion and what's its secret?

Investors bet the iPhone maker will keep launching best-selling products as it explores new markets such as automated cars and virtual reality.
Apple had a stunning start to 2022 when it briefly became the first company to touch a $3 trillion (€2.6 trillion) market value on Monday before closing the day just short of the mark.

It comes as investors bet the iPhone maker will keep launching best-selling products as it explores new markets such as automated cars and virtual reality.

But is the tech giant really worth $3 trillion (€2.6 trillion) 16 months after becoming the first company valued at $2 trillion (almost €1.8 trillion)?

The answer depends on how one views the iPhone maker's ability to keep up the unprecedented growth of the past 15 years.

In its last fiscal year which ended September 25, Apple delivered 33 per cent revenue growth to $365.8 billion (€323 billion) thanks to strong demand for 5G iPhone upgrades.

But that growth spurt came after a year of single-digit sales growth and the 2019 fiscal year when Apple's sales declined.
Apple's new technologies

The bull case for Apple is that it has built an ecosystem of a billion iPhone owners who spend money on services and that it is well-positioned for future categories like self-driving cars and augmented reality.

The deep discount investors once ascribed to Apple's stock because of its dependence on the iPhone for sales growth has disappeared as Apple has proved that the device sits at the centre of an expanding solar system that adds new gadgets like the Apple Watch and Apple AirTags and new, paid services like television and fitness classes.

"Apple has been and still is an incredible growth story anchored by must-have products and a growing portfolio of services. While years ago the stock price was a value investor's dream, I don’t think the current near-record high price should be a sell signal for long-term focused investors," said Trip Miller, managing partner at Gullane Capital Partners.

Moreover, Apple is trading at about 30 times its expected 12-month earnings, down a bit from a multiple of 32 in early 2021 but still at highs not seen since 2008, according to Refinitiv data.

Apple "seems to be vaccinated against anything that Omicron can throw at it," Eddins said. "I’m not complacent at this level, but there would have to be some nasty unforeseen events to rock the boat".

Some analysts believe Apple has plenty of room to grow in the coming years, with future products such as the Apple Car.

"We see the prospects of Apple Car - representing the clearest path to doubling Apple's revenue and market cap - catalysing a shift in investor narrative back toward the attractiveness of the platform (1 billion loyal customers) and long-term, sustainable growth," Morgan Stanley analyst Katy L Huberty wrote in November.
No Guarantees

The bear case, however, is that Apple is hitting the limits of how much it can grow its user base and how much cash it can squeeze from each user, with no guarantees that future product categories will prove as lucrative as the iPhone.

In a December note to investors, Bernstein analyst Toni Sacconaghi warned that Apple's prospects in the augmented and virtual reality category are bright but likely to account for only 4 per cent of its revenue by 2030.

Moreover, the entire market for those devices is not likely to be near the billion-unit mark until 2040, he wrote.

Sacconaghi also saw "no obvious catalysts for multiple expansion" in Apple's stock "given slower expected growth" in the next fiscal year. He has a market perform rating on the stock.

Another concern is uncertainty over Apple's ability to lock in the same profits for paid services on its future hardware. Its App Store business model, which takes commissions on in-app purchases of digital goods, has been targeted by proposed legislation in the United States and Europe.

To be sure, one of the primary drivers of Apple's ballooning valuation is the goal it set in 2018 to get what at the time was nearly $100 billion (€88 billion) in net cash off its balance sheet and become net-cash neutral.

That goal, for which Apple never specified a deadline, has been tough to meet because it simply keeps making money. Apple generated $104 billion (around €92 billion) in cash from operations in fiscal 2021 and returned $106.5 billion ( (almost €94 billion) to shareholders. But its net cash remained at $66 billion (€58 billion) at the fiscal year's end.

With big acquisitions largely out of the question under current US antitrust regulators, Apple has had few options but to shovel cash back to shareholders, said Tom Plumb, founder of Wisconsin Capital Management and an Apple shareholder.

"They're fighting the fact they've got $100 billion [€88.5 billion] of cash flow a year," Plumb said. "You can't bet against a company that has this type of cash flow".
Add Comment