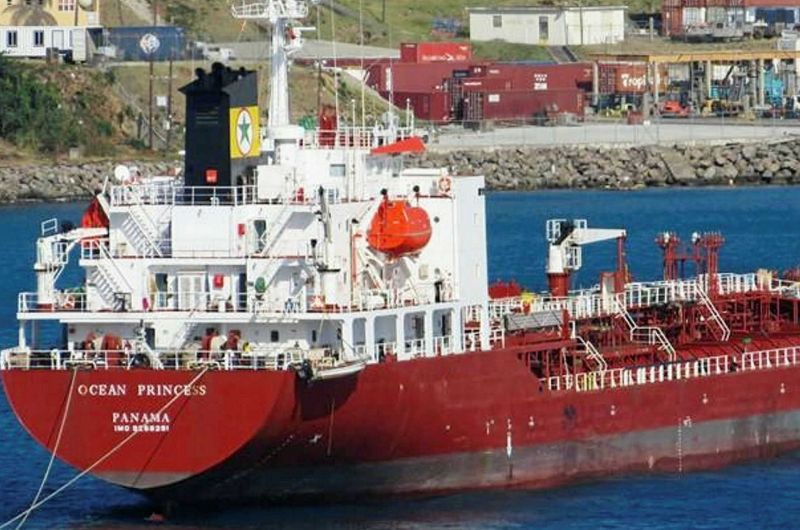 Ionian Management, which manages three vessels including M/T Ocean Princess, was sentenced on Wednesday, November 2, 2022, to pay a fine of $250,000 after pleading guilty to a violation of the Act to Prevent Pollution from Ships.
According to U.S. Attorney for the V.I. Delia Smith, the New York-based company was sentenced by U.S. District Court Judge Wilma Lewis on St. Croix, and was also placed on probation for one year.

According to the District Court, while vessels are operating within the U.S. Caribbean Emissions Control Area (ECA), they must not use fuel that exceeds 0.10% sulfur by weight to help protect air quality. However, between Jan. 3, 2017, and July 10, 2018, the M/T Ocean Princess entered and operated within the ECA using fuel that contained excessive sulfur on twenty-six separate occasions.

The fuel was petroleum cargo that had been transferred to the fuel tanks as authorized by Ionian Management. Once authorized, the crew of the M/T Ocean Princess transferred the higher sulfur fuel from the cargo tanks into the bunker tanks and used it to fuel the vessel, even though it exceeded the 0.10% sulfur by weight maximum.

U.S. Coast Guard inspectors boarded the M/T Ocean Princess on July 10, 2018, to conduct an inspection. During the inspection, the U.S. Coast Guard discovered the vessel’s use of fuel with an excessive sulfur content.

“The sentence imposed on this commercial vessel manager for intentionally violating environmental laws designed to protect the air quality of the United States sends a strong message that the United States will not tolerate such violations and will hold violators accountable,” said Assistant Attorney General Todd Kim of the Justice Department’s Environment and Natural Resources Division.

“The pristine beauty of our Virgin Island waters is one of our most precious resources, essential to our tourism and our fragile marine ecosystem,” said First Assistant U.S. Attorney John Kuhn for the District of the Virgin Islands. “Today’s sentencing of Ionian Management Inc. for its role in causing high sulfur fuel to be burned within the Caribbean Emissions Control Area, and here in the waters near St. Croix, sends a strong message to commercial managers of ships that such conduct will not be tolerated. To protect the territory of the Virgin Islands, we will continue to pursue criminal enforcement of environmental laws.”

“The results announced today send a strong message to anyone who seeks to take shortcuts and intentionally pollute our environment, and I couldn’t be prouder of the Coast Guard’s Resident Inspection Office in St. Croix and Sector San Juan marine inspectors who first identified the issue, as well as our Coast Guard Investigative Service agents who worked closely with the Environmental Protection Agency in San Juan to investigate this case,” said Rear Admiral Peter Brown, Commander of the Coast Guard, Seventh District. “We will continue to work with our Department of Justice and environmental protection partners to hold accountable any who put profit above the protection of our waters, beaches and the air above them for future generations.”

The M/T Ocean Princess was owned by Lily Shipping Ltd. and operated by Ionian Shipping and Trading, both Greece-domiciled companies. These two companies previously pleaded guilty to felony violations related to the use of non-compliant fuel and falsification of records and were sentenced to pay a combined criminal fine of $3,000,000, serve a three-year period of probation, and implement an Environmental Compliance Plan, according to the District Court. The sentencing of Ionian M is the final chapter in this multi-year investigation and prosecution of the companies and individuals involved in the use of non-compliant, high-sulfur fuel in the operation and management of the M/T Ocean Princess.