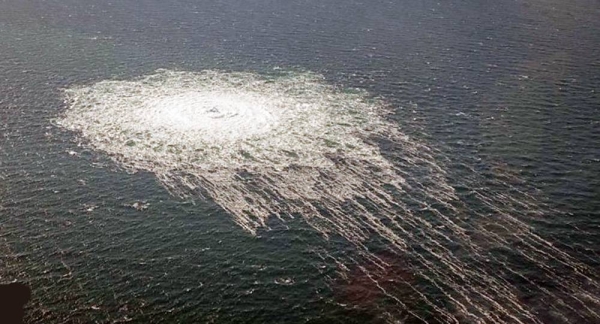 At least 50 meters (164ft) of an underwater pipeline bringing Russian gas to Germany is thought to have been destroyed by a blast last month.
Video shot by a Norwegian robotics company, published by Swedish newspaper Expressen, appears to show the massive tear in the Nord Stream 1 pipe.

It is still unknown who or what caused the blasts amid suspicions of sabotage.

Gas deliveries have been suspended since the Sept. 26 explosions on the concrete-reinforced steel pipes crossing the Baltic Sea.

The Kremlin has accused Western investigators of seeking to blame Russia for the damage.

“Elementary logic” shows damaging the pipeline was not in the Russian interest, Kremlin spokesperson Dmitry Peskov said on Tuesday.

Western leaders have stopped short of directly accusing Russia but the EU has previously accused Russia of using its gas supplies as a weapon against the West over its support for Ukraine.

Working with Expressen, Blueye Robotics used a submersible drone to film the twisted and bent metal of the Nord Stream pipe 80m beneath the surface of the sea.

Parts of the pipeline are either missing or buried in the seabed, the company said.

“It is only an extreme force that can bend metal that thick in the way we are seeing,” drone operator Trond Larsen told Expressen.

Danish police findings appear to confirm those of Swedish authorities who have also been investigating the leaks in the pipelines.

“The inspections have confirmed that there has been extensive damage to Nord Stream 1 and 2 in the Danish exclusive economic zone,” said Danish police.

German, Danish, and Swedish authorities have all been investigating the incident but Swedish prosecutors reportedly rejected a joint investigation out of fears of sharing sensitive information related to national security.

Russia previously demanded to be involved in any investigations, saying the damage was in international waters, but Denmark and Sweden refused.

The Nord Stream 1 pipeline has not transported any gas since August when Russia closed it down, saying it needed maintenance.

It stretches 1,200km (745 miles) from the Russian coast near St Petersburg to northeastern Germany. Nord Stream 2 was still awaiting clearance for use when Russia invaded Ukraine in February.
Add Comment