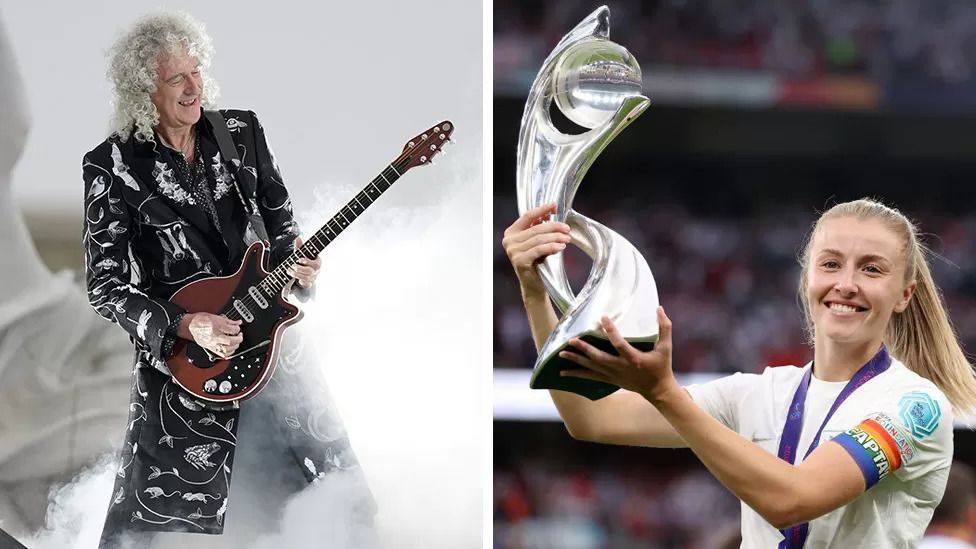 New Year Honours 2023: Brian May and Lionesses on list

Queen guitarist Brian May has been knighted in a New Year Honours list that also celebrates the Lionesses' victory at Euro 2022.

There is a knighthood for artist Grayson Perry too and a damehood for Olympic heptathlete Denise Lewis.

Lissie Harper is made an MBE following her campaign for tougher sentences for the killers of emergency workers.

Her husband, PC Andrew Harper, died on duty in Berkshire in August 2019.

Among the famous faces on the lists are comedian Frank Skinner, who is made an MBE for services to entertainment. He said he had not yet told his family because he thought it may have been "some sort of administrative error".

Dame Mary Quant, 92 - the fashion designer widely credited with popularising the mini skirt in the 1960s - joins the elite Companions of Honour.

And Virginia McKenna, the 91-year-old actress and co-founder of the Born Free Foundation, is made a dame for services to wildlife conservation and to wild animal welfare.

Senior diplomats who led the UK's response to the Ukraine war are recognised, with damehoods for Melinda Simmons, ambassador in Kyiv, and Deborah Bronnert, ambassador in Moscow.

Louenna Hood, a nanny from Cambridgeshire who raised more than £190,000 and delivered essentials for people fleeing Ukraine, receives a British Empire Medal.

The 2023 New Year Honours are the first to be signed off by King Charles.

There are 1,107 recipients on the main list, announced by the Cabinet Office - 50% of whom are women.

There are another 141 recipients on the list announced by the Foreign Office recognising overseas contributions, as well as separate lists for police, fire and ambulance personnel and military service.

Sir Brian May - who famously played God Save The Queen on the roof of Buckingham Palace during the Golden Jubilee - gets his title just months after his band helped launch the late monarch's Platinum Jubilee concert this summer.

The musician, astrophysicist and animal welfare advocate is knighted for services to music and charity, after more than 50 years in one of Britain's most popular rock bands.

Sir Brian was previously appointed a CBE in 2005, while Queen drummer Roger Taylor was made an OBE in the 2020 New Year Honours.

On being recognised for his campaigning work, Sir Brian told BBC News: "This is a kind of licence, a kind of commission to carry on doing what I'm doing, and it gives me a bit more power to my elbow. So I'm very happy about that."

The four Lionesses are recognised after the July triumph at Wembley that brought the first piece of major silverware in their history, and the first for a senior England team since the men's 1966 World Cup success.

Their Dutch head coach Sarina Wiegman was made an honorary CBE in the Foreign Office list.

England defender Lucy Bronze said her MBE was "special and pretty amazing", adding: "It's something for my family that will make them very proud".

But the decision not to recognise every member of the England women's football squad has been questioned by observers after some previous lists honoured all members of triumphant national teams.

He said otherwise "you get people who've done five minutes on the pitch... get an award".

Denise Lewis, 50, who won a gold medal at the Sydney Games in 2000, and is now president of Commonwealth Games England, told BBC News she was "extremely proud" of her damehood, saying it was "right up there" with her career achievements.

Three politicians have been knighted - Conservative Alok Sharma for his contribution to combatting climate change through his leadership at COP26, Tory Julian Lewis, chairman of the parliamentary Intelligence and Security Committee, and Labour's Chris Bryant, who chairs the Commons Standards Committee.

There is an OBE for former sport minister Helen Grant, the Conservative MP for Maidstone and the Weald.

Chief Rabbi Ephraim Mirvis has been knighted, and is among a handful of Jewish community leaders to be recognised, including the president of the Board of Deputies of British Jews, Marie van der Zyl, and several Holocaust survivors.

Countdown presenter Rachel Riley is made an MBE for her efforts to raise awareness of the Holocaust and combat antisemitism.

Noreen Riols, 96, one of the last surviving female members of the French section of the Special Operations Executive, has dedicated her MBE to the memory of her late "comrades".

As a member of the British espionage and sabotage organisation known as "Churchill's Secret Army," she trained agents ahead of their deployment to occupied France.

Some 60% of the recipients on the main list are people being recognised primarily for having undertaken outstanding work in their communities, either in a voluntary or charitable capacity.

The youngest is Dara McAnulty, 18, from Annalong, Co Down, who receives a BEM for his environmental work and help for people with Autism Spectrum Disorder.

The oldest is 100-year-old Peter Offord Davies from Macclesfield, who receives a BEM for his work as a reading volunteer at Dean Valley Community Primary School.

Marie McCourt, who campaigned to make it harder for killers and paedophiles who hold back information on their victims to receive parole is made an MBE. Helen's Law was brought in following the murder of Helen McCourt in Merseyside in 1988.

Rosamund Adoo-Kissi-Debrah, from south London, who campaigned for policy change after her daughter Ella, nine, died from an asthma attack and air pollution in 2013, has been made a CBE.

Journalist Anne Diamond, 68, who has long campaigned to stop cot death, described being made an OBE as the "crowning achievement" for all those who helped her and dedicated the achievement to her late son Sebastian.

In the business world, the first chairwoman of Rolls-Royce, Anita Frew, and the first woman to run NatWest, Alison Rose, have been given damehoods.

Ivan Menezes, boss of drinks firm Diageo has been knighted, while Johnny Boden - founder of the eponymous clothing company - has been made a CBE for services to fashion and retail.

Other musicians honoured include Janet Kay, who went to number two in the charts in 1979 with her song Silly Games. The "Queen of Lovers' Rock" becomes an MBE for services to music.

Saxophonist and CBeebies presenter YolanDa Brown has been made an OBE for services to music, music education and broadcasting.

There are also OBEs for John Suchet for services to journalism and charity, and illustrator David Sutherland, who has spent 60 years drawing for the Beano comic.

Football figures from across the UK are also on the list, including Pat Jennings, made a CBE for his football and charity service in Northern Ireland, and Scotland's football captain Andy Robertson, made an MBE for his work for charity and with young people.

Former Swindon Town and Brentford footballer Chris Kamara, who recently spoke out about his difficulties with the speech disorder apraxia, has been made an MBE for services to football, anti-racism and charity.