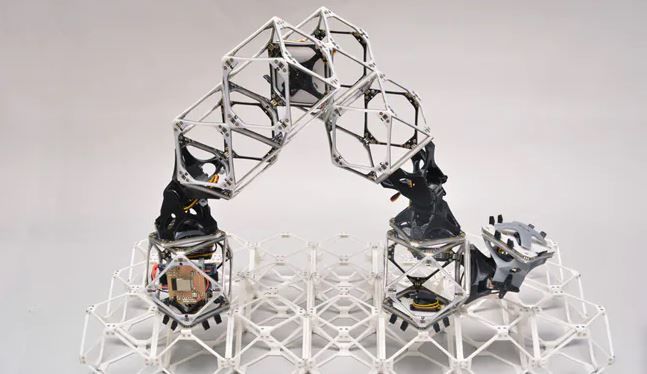 The new research from MIT's Center for Bits and Atoms is built on years of research, including recent studies demonstrating that objects like a deformable airplane wing and a functional racing car can be assembled from tiny identical lightweight pieces - and that robotic devices can be built to do some of the assembly work.

The team has now demonstrated that both the assembler bots and the structure being built can be made of the same sub-units and that the robots can move independently in large numbers to complete large-scale assemblies quickly.

As per MIT, voxels (a term borrowed from computer graphics) are at the heart of the system, carrying power and data that can be shared between pieces. The pieces form the robot's foundation, grabbing and attaching additional voxels before moving across the grid to be assembled.

CBA Director Neil Gershenfeld said in a press release, "When we're building these structures, you have to build in intelligence." While earlier versions of assembler bots were connected by bundles of wires to their power source and control systems, "what emerged was the idea of structural electronics - of making voxels that transmit power and data as well as force."

He observed the new system in operation and remarks, "There's no wires." There's just the structure."

The robots themselves are made up of a series of voxels connected end-to-end. These robotic devices must make decisions at every stage of the assembly process. According to CBA doctoral student Amira Abdel-Rahman, it could build a structure, another robot of the same size, or a larger robot.

"While the experimental system can carry out the assembly and includes the power and data links, in the current versions the connectors between the tiny subunits are not strong enough to bear the necessary loads. The team, including graduate student Miana Smith, is now focusing on developing stronger connectors," the press release further stated.
Add Comment