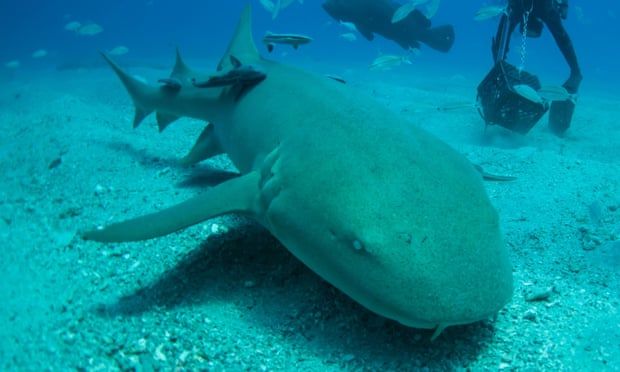 ‘Like a scene out of Jaws’: British boy attacked by sharks in Bahamas

Finley Downer, eight, bitten on both legs by nurse sharks at Compass Cay before being pulled to safety
An eight-year-old British boy has been attacked by sharks while on holiday in the Bahamas.

Finley Downer was surrounded by three nurse sharks while swimming in a lagoon last week, his family said, before he was pulled to safety after suffering bites on both legs.

Finley was then taken to a clinic in the capital, Nassau, where he underwent a three-hour operation, according to PA Media.

Finley’s father, Michael Downer, 44, told the Sun: “It was like a scene out of Jaws,” adding that his son could have been killed.

Michael had taken the family, including Finley and his sisters Lily, nine, and Emily, 12, on a five-island tour when the attack took place at Compass Cay. The family told the paper they joined a crowd of people swimming among nurse sharks in the lagoon.

Describing the scene, his father recalled there was so much blood as his son said to him: “Dad, I don’t want to die.” The family has since returned home to Kettering, Northamptonshire, where Finley is recovering.

Tour guide operator Exuma Escapes told the Sun the family entered a lagoon not used on their tour, without a guide. They described nurse sharks as docile bottom-feeders, “unless handled incorrectly”.
Add Comment