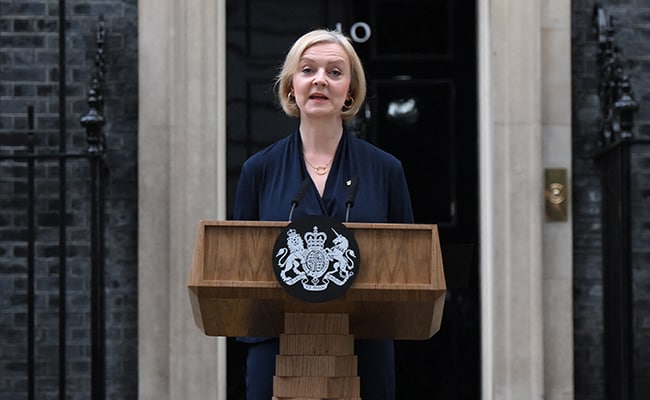 From Liz Truss To Gordon Brown: These Are Britain's Shortest-Serving PMs

British Prime Minister Liz Truss, who announced her resignation on Thursday after just six weeks in power, goes down as the shortest-serving premier in the last 100 years.

AFP looks at the five leaders who have had the shortest stint in 10 Downing Street over the past century:

But the mini-budget unveiled by her finance minister Kwasi Kwarteng, which promises tax cuts for all, including top earners, to be funded by massive borrowing, caused market chaos.

With the pound taking a battering, Truss and Kwarteng were forced into a U-turn.

Truss later fired Kwarteng but by then she had been mortally weakened and when her interior minister quit and growing number of Tory MPs revolted she fell on her sword.

The Canadian-born son of a Scottish clergyman, who ruled for less than a year in 1922-1923, was the shortest-serving British prime minister of the 20th century.

Lloyd George was forced to resign and Bonar Law, who lost his two eldest sons in World War I, succeeded him.

After 209 days the man dubbed the "forgotten" British premier himself stepped aside due to ill health and died six months later.

Douglas-Home, who was from a major Scottish aristocratic family, led the country for a year before the Conservatives were beaten into opposition in October 1964 by Harold Wilson's Labour Party. He later served as an acclaimed foreign secretary under Edward Heath.

Anthony Eden was a much-feted foreign minister under wartime leader Winston Churchill but had much less success in the top job.

He served three times as Britain's top diplomat, in the 1930s, 1940s and 1950s but by the time he got his chance to lead, after Churchill resigned in 1955, he was suffering from ill health.

His handling of the Suez crisis in 1956 proved his downfall, with the Anglo-French attack on Egypt over its nationalisation of the canal drawing widespread condemnation.

Eden never recovered politically from the fiasco and resigned on January 9, 1957.

Brown was a star finance minister under Labour prime minister Tony Blair from 1997 to 2007.

But after spending a decade as leader-in-waiting the dour Scot struggled to connect with the public when he became premier.

While campaigning in the 2010 election he tripped up badly after being caught on a live television microphone as describing a widowed pensioner he had just met as "bigoted".

In the 18th and 19th centuries, British prime ministers often spent less than a year in office.

In the 19th century, the Duke of Wellington served a mere 22 days during his second term as prime minister in 1834.