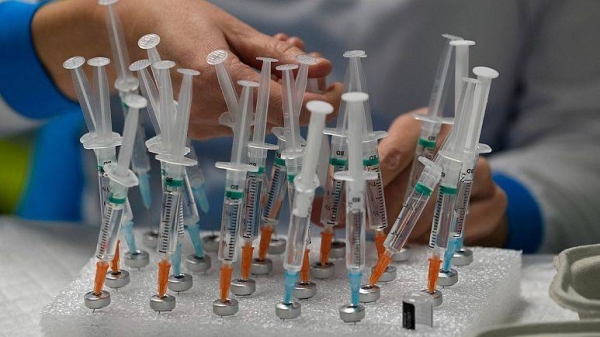 The agreements signed between the European Commission and pharmaceutical companies to roll out COVID-19 vaccines offered significant long-term benefits to the corporations involved to the detriment of public health and global equality, research by NGOs has found.
“Private interests exerted undue influence over European policymakers during the COVID-19 pandemic, resulting in a crying lack of transparency on publicly funded vaccine contracts which left the public with more questions than answers," Rowan Dunn, EU Advocacy Coordinator at Global Health Advocates, a French NGO, has said.

Two reports released on Thursday and authored by Global Health Advocates and STOPAIDS, a UK-based non-profit, accuse the EU's executive of redacting contracts with pharmaceutical companies and accommodating industry requests on such things as pricing, intellectual property and confidentiality requirements in a bid to quickly roll out the vaccines for its population.

This was despite the fact that some of these confidentiality requirements weren’t consistent with EU legislation.

“Protecting commercial interests came at the expense of supporting policy interventions that could have increased global vaccine access, and which harmed transparency”, the report reads. “With an unaccountable driver, the public were taken for a ride”.

For Belgian MEP Marc Botenga (The Left), who is cited in the report, "there was no real transparency in the contract negotiations. On the contracts, there have been minor steps forward - under pressure."

“So, from the first contracts basically the Commission outsourced transparency, meaning they will give you what the company tells us we can give you. You are in a situation where the company decides”, he added.

EU Ombudsman Emily O’Reilly ruled maladministration on the part of the Commission last year after the EU's executive said it could not release text exchanges between its president, Ursula von der Leyen, and the CEO of Pfizer.

The Commission said following the request from the EU's watchdog for the messages to be released that they had not been kept as official EU documents because "due to their short-lived and ephemeral nature" text messages in general "do not contain important information relating to policies, activities and decisions of the Commission".

O’Reilly said then that the Commission's answer "leaves the regrettable impression of an EU institution that is not forthcoming on matters of significant public interest."

The NGOs' reports also concluded that the global vaccine rollout created levels of global inequality so great that many called it a “vaccine apartheid”.

While high-income countries largely had widespread access to vaccines and medical countermeasures for their populations, low and middle-income countries could not access the same conditions in their fight against Covid-19.

Global Health Advocates and STOPAIDS argue in the reports that this inequality can be explained by the fact that “commercial, economic and geopolitical” considerations were placed above global health considerations.

“When it came to our journey out of the pandemic the route toward equitable access could have been a direct one, but with Big Pharma in the driver’s seat choosing to follow private interests, access to vaccines for lower-income countries was likely denied," STOPAIDS' Advocacy Manager James Cold said.

Pharmaceutical companies sold the vast majority of their doses to the richest countries in the world - a strategy denounced as putting profits first, especially as companies wouldn’t allow poorer countries to produce the life-saving vaccine on their own because of intellectual property rules.

Laid down in trade deals, these allowed pharma corporations to operate as monopolies, with no responsibility to share the knowledge they owned, despite how much society needed it, the reports stated.

At the start of the pandemic, the EU made several statements on the importance of global vaccine solidarity. However, the report said that these promises weren't turned into concrete actions.

“Instead, EU actions translated into an every-country-for-itself attitude, which effectively led to a form of gatekeeping of COVID-19 health technologies," it added.

According to data from the United Nations Development Programme (UNDP), nearly 73% of people in high-income countries have received at least one dose of the COVID-19 vaccine, compared to just 30% in low-income countries.
#Vaccines  #COVID-19  #vaccine  #Pfizer  #Covid
Add Comment