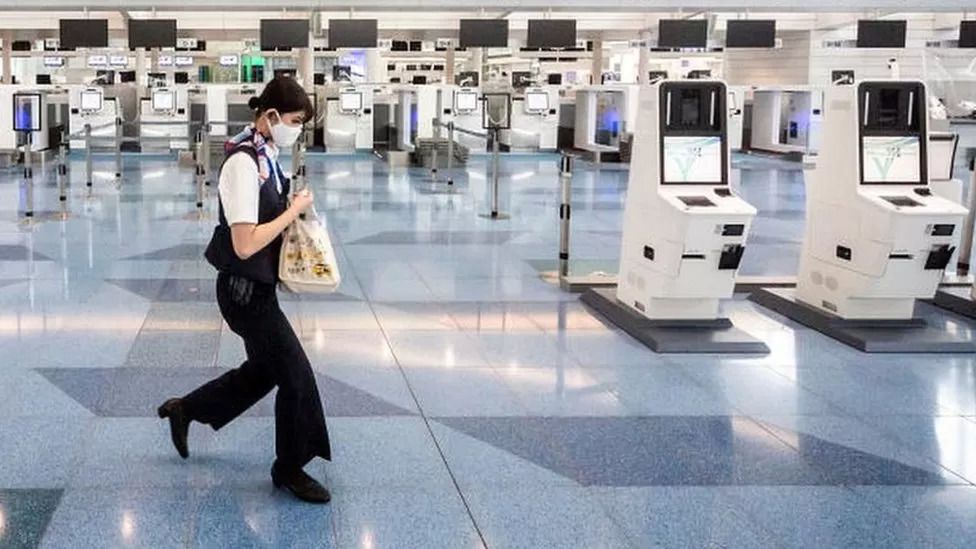 Do restrictions on travel work against Covid?

The UK government has confirmed passengers arriving in England from China will have to provide a negative Covid test before they board a flight.

Several countries - including the US, Japan, Italy and Malaysia - are now enforcing testing on visitors from China following the effective ending of Beijing's zero-Covid policy,

But do such restrictions work?

What happened earlier in the pandemic?


Australia imposed some of the strictest travel restrictions. From 2020, it closed its borders to non-residents and banned Australians from travelling abroad (with a few exceptions).

Countries such as the UK were more lenient. They required international arrivals to use quarantine hotels and take Covid tests.

After the pandemic began in 2020, the World Health Organization (WHO) stated it didn't generally support travel bans, as they were "usually not effective".

It said: "Travel measures that significantly interfere with international traffic may only be justified at the beginning of an outbreak, as they may allow countries to gain time."

After the emergence of the Omicron variant it again warned against blanket travel bans, saying they would not stop the global spread.

"They can adversely impact global health efforts... by dis-incentivising countries to report and share epidemiological and sequencing data," it said.

What is the WHO saying now?


The WHO's director general said he was "very concerned over the evolving situation in China, with increasing reports of severe disease".

He said that the WHO needed more detailed information to understand the risks created by the situation on the ground in China.

And on Twitter he added: "In the absence of comprehensive information from China, it is understandable that countries around the world are acting in ways that they believe may protect their populations."

Professor Andrew Pollard, director of the Oxford Vaccine Group told BBC News: "Trying to ban a virus by adjusting what we do with travel has already been shown not to work very well.

"We've seen that with the bans on travel from various countries during the pandemic, that hasn't stopped those viruses travelling around the world eventually."

The word "eventually" is important here, because studies suggest that travel restrictions tend only to delay the spread of the virus spreading in a country, but cannot keep it out completely.

A report in the British Medical Journal found that international border restrictions could delay the spread by two months.

One of its authors, Dr Karen Grepin from Hong Kong University, told Reality Check: "We have learned during the pandemic that universal measures, applying to all travellers not just those from certain countries, are more effective than targeted measures, for example against Chinese travellers.

"The only type of travel restrictions that have been shown to be effective during the pandemic are those that involve lengthy quarantine periods and I don't think there is a lot of appetite for such measures at this point."

What other research was there?

Research published in the journal Nature, in December 2020, said restrictions worked well as Covid first began to spread around the world, but became less effective the later they were introduced.

A study by the WZB Berlin Social Science Center in Germany looking at travel restrictions and death rates in more than 180 countries reached similar conclusions and added:

* quarantine for all travellers was more effective than entry bans (which in some cases exempted returning nationals).

Another scientist advising the UK government, Prof Mark Woolhouse, told Reality Check that restricting arrivals from China to the UK would not do much to limit the number of Covid cases in this country.

"We have far too many Covid-19 cases here in the UK at present for imported cases to make a significant contribution," he said.

What about new variants?

It has also been suggested that restrictions would prevent potential new variants of Covid reaching the UK.

However, if there is such a variant, said Prof Woolhouse, travel restrictions would be too late.

"It will almost certainly have got here already," he said,

"Measures could only work if the variant happens to emerge during the period the measures are in place and even then they will only delay, not prevent, the arrival of the variant."

Besides, a new variant is not more likely to come in from China than from anywhere else in the world.

"Though China is clearly experiencing a substantial wave there is no reason to suspect that wave will be a crucible for the emergence of new variants," said Prof Woolhouse.

"The next variant is at least as likely to emerge from somewhere entirely different - there are currently around four million reported cases per week worldwide (and surely far larger numbers are unreported). So why concentrate only on China?"

However, the WHO has said it is concerned that China is not sharing information about its latest Covid surge, possibly including the emergence of any new variants.

"Targeted border measures against China may be more of a political statement in response to lack of information-sharing than a sincere attempt to promote public health," said Catherine Worsnop from the University of Maryland's School of Public Policy.