Damien Hirst burns his own art after selling NFTs

Damien Hirst has begun burning hundreds of his own artworks after selling a series of non-fungible tokens (NFTs).

The artist told buyers who bought pieces from his latest collection to choose either the physical artwork or the NFT representing it.

Those who chose the NFTs were told their corresponding physical piece would be destroyed.

Asked how he felt to be burning the works, Hirst said: "It feels good, better than I expected."

The artist was dressed in silver metallic boiler-suit trousers and matching fire safety gloves as he collected each piece and burned it in a contained fire box.

It has been estimated the works being burned are collectively worth almost £10 million. 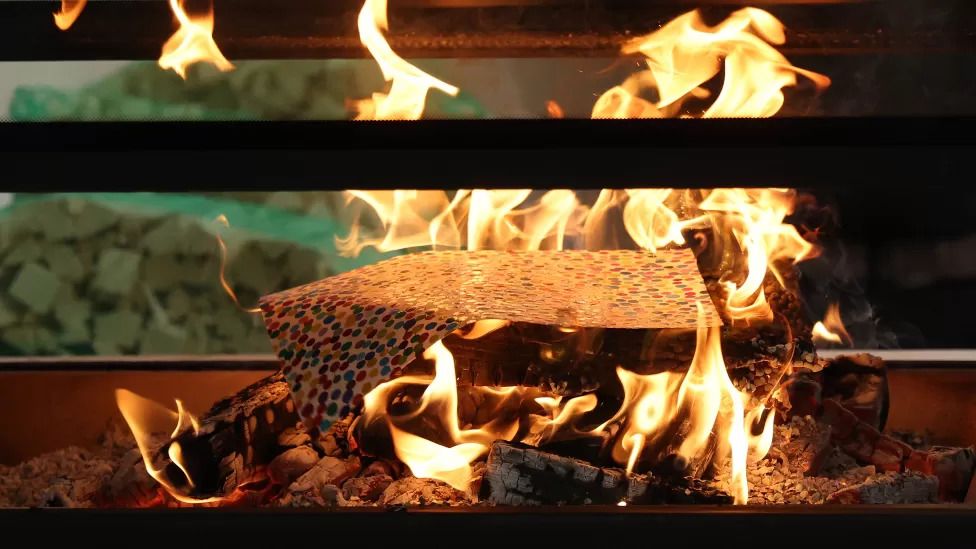 Newport Street Gallery said 4,851 buyers chose the NFTs, which means that many physical artworks will be burned

Hirst launched his first NFT collection last year, called The Currency, which was made up of 10,000 NFTs, corresponding to 10,000 original pieces of art.

Collectors who bought one had to choose between keeping the NFT or swapping it for the physical artwork.

Artworks for the non-exchanged NFTs would be destroyed, buyers were informed, with Hirst telling his Instagram followers earlier this week that he would burn the first 1,000 artworks on Tuesday.

Livestreaming the event, the Turner Prize winner and assistants used tongs to deposit individual pieces stacked in piles into fireplaces in the gallery as onlookers watched. 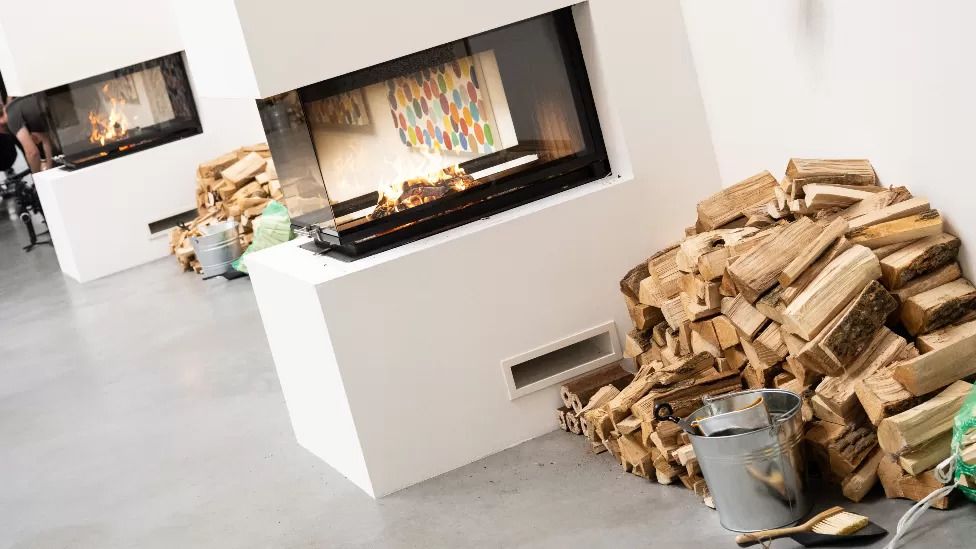 "A lot of people think I'm burning millions of dollars of art but I'm not," Hirst said. "I'm completing the transformation of these physical artworks into NFTs by burning the physical versions.

"The value of art, digital or physical, which is hard to define at the best of times will not be lost; it will be transferred to the NFT as soon as they are burnt."

The artworks were created in 2016 with enamel paint on handmade paper and each numbered, titled, stamped and signed.

They will be burned until The Currency exhibition closes on 30 October.

Before Hirst burned each artwork, he showed it to a camera to log its unique code to keep track of every piece that had been burnt.

Many have criticised Hirst for burning his own valuable artworks during a cost of living crisis.

"I's almost like Damien Hirst is so out of touch with the real world that he's basically transcended to another plane of existence, populated only by oligarchs and the once-edgy artists they collect," wrote Time Out's Eddy Frankel.

"Still, look at it this way, even if you can't afford to turn on your heating at home, just go to Newport Street Gallery: it's free and it should be nice and toasty with all those £20,000 paintings on fire." 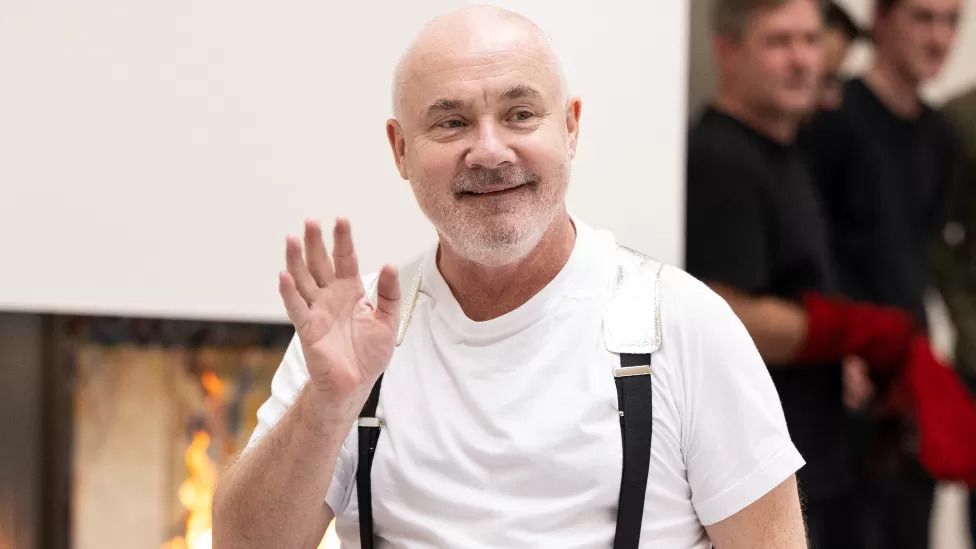 Hirst, who is no stranger to what some critics describe as publicity stunts, rose to fame during the 1990s Young British Artist scene.

He picked up the Turner Prize in 1995 and his work has sold for millions, but he is also one of Britain's most controversial artists.

Much of his work has divided critics, including one featuring a dead shark floating in formaldehyde and another consisting of a bisected cow and calf.

The 57-year-old is also known for his spot paintings and "For The Love Of God", a platinum cast of an 18th-century human skull encrusted with diamonds.

Speaking to the BBC about his art in 2018, he said: "If I put it in a skip outside a pub, would someone take it home? And you think, 'yeah, they would.' If it's good, it won't get left in the street. I think that's a good way of working out if a painting's good or not." 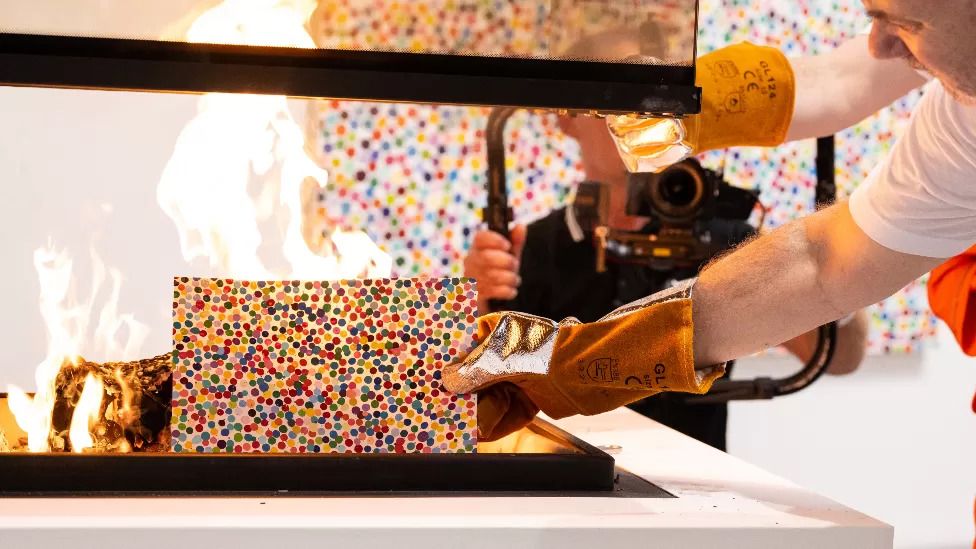 NFTs are "one-of-a-kind" assets in the digital world that can be bought and sold like any other piece of property, but which have no tangible form of their own.

The digital tokens can be thought of as certificates of ownership for virtual or physical assets.

Traditional works of art such as paintings are valuable precisely because they are one of a kind.

But digital files can be easily and endlessly duplicated.

With NFTs, artwork can be "tokenised" to create a digital certificate of ownership that can be bought and sold.

NFTs soared in popularity last year as crypto-rich speculators sought to cash in on rising prices but sales volumes have fallen more recently.