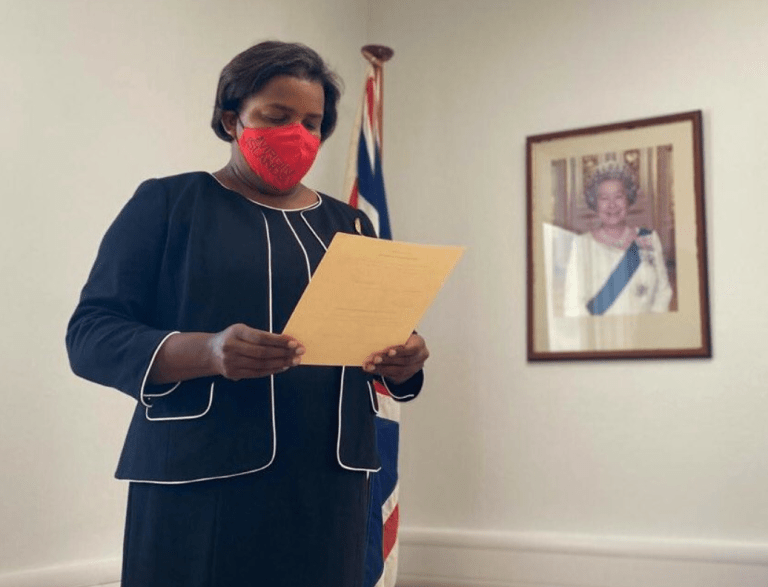 Justice Adrian Jack has refused an adjournment requested by Attorney General (AG) Dawn Smith over a matter involving a same-sex couple before the High Court.

According to a recent court document, the AG requested the adjournment for a hearing currently listed for September 29 and 30 and said her application was supported by the interested party, the BVI Christian Council (BVICC), but opposed by the couple.

The matter concerns the validity of the marriage between Kinisha Forbes and Kirsten Lettsome and whether any prohibition against same-sex marriage in the BVI is contrary to the constitution of the Virgin Islands.

The couple entered a civil partnership in 2011 in the United Kingdom (UK), and was later issued a marriage certificate once the UK’s same-sex couples law came into effect.

Justice Jack noted that when a previous adjournment was sought by the BVICC, the AG took a neutral position and did not appear before the court at that time.

The court document further noted that the AG made no application for an extension of time in which to file evidence or for an adjournment of the final hearing.

Justice Jack noted in his ruling that the AG in her current application argued that her chambers have been very busy with the aftermath of the arrest of the former Premier, Andrew Fahie, in Miami and the publication of the report of the Commission of Inquiry.

“The implementation of the framework agreement made between the BVI and the British governments subsequent to the report of the Commission of Inquiry has been resource-intensive,” the AG claimed in her argument.

Further, it was noted that Smith has had difficulty obtaining instructions from the BVI government.

In the affidavit made in support of her application, it was stated: “This matter was formally brought to the attention of Cabinet on or about 22 August 2022 after which preparations began in earnest on the respondent’s case.”

Among other things, Justice Jack ruled that the dilatoriness (slowness to act) on the AG’s part, in his judgment, affords no grounds for an adjournment.

“The claim to difficulty in obtaining instructions is belied by the fact that as long ago as 10th March 2021 the respondent [AG] was able to indicate that the government intended to oppose the claimants’ claim,” the Judge ruled.

In the meantime, Premier Dr Natalio Wheatley recently alluded to the court matter, suggesting that no judge or external government should be allowed to make a decision on the BVI’s laws on same-sex marriages.

According to the Premier: “We have the opportunity to make those changes [about same sex marriage] through our constitutional review or through our own local legislature. Any change — or whether the law remains the same — is a matter, in my view, for the people of the Virgin Islands; not for a judge and not for any other government to impose on us.”