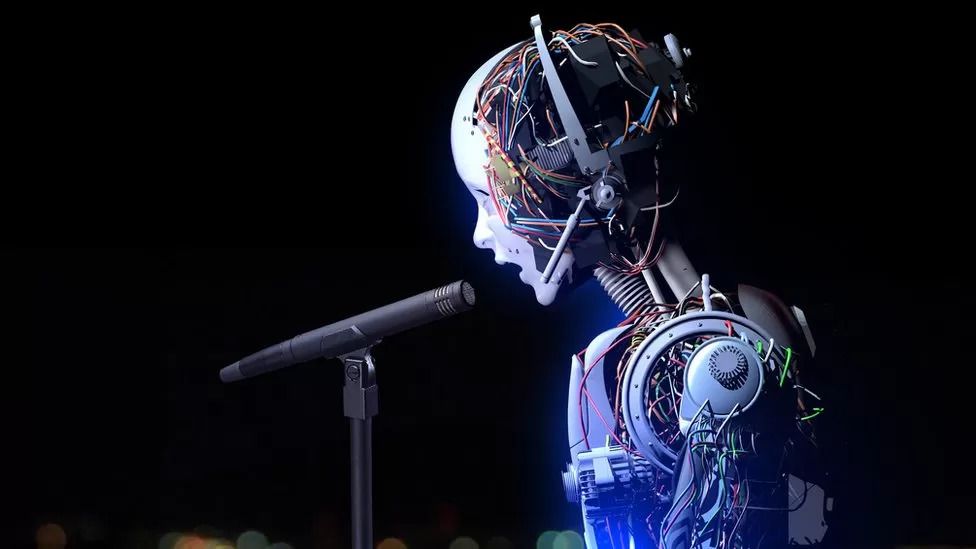 Politicians may be accused of being robotic on occasions - but the real robots are creeping into Parliament, and they are not taking bribe.A robot has given evidence in Parliament, an MP has used a chatbot to write a speech - what next?

In recent years, robots have given evidence to select committees and one MP has even used a chatbot to write one of his speeches in the House of Commons.

So just to have a bit of festive fun - or perhaps give a terrifying glimpse into our future under artificial intelligence overlords - we asked the chatbot ChatGPT to have a go at taking Prime Minister's Questions.

The chatbot is still being developed and its creators acknowledge its limitations including using "plausible-sounding but incorrect or nonsensical answers" and being "excessively verbose".

But could it imagine being a politician? Here is what we learnt when we asked it to try.

'Thank you Boris, have a good day'

However, when we asked ChatGPT to write an exchange between the two men, their relationship was somewhat different.

It began: "Good morning, Keir. How are you today?"

"Good morning, Boris. I'm doing well, thank you. How are you?" came the reply.

"I'm doing well, thank you. So, Keir, I wanted to talk to you about the government's plans for Brexit."

"Yes, I'd be happy to discuss that with you. What specifically do you want to know?"

"Well, we've been working on a new trade deal with the European Union, and I wanted to get your thoughts on it."

The exchange continues in this vein, with both men agreeing to work together in the interests of the country "regardless of political differences".

For anyone who remembers the Brexit debates in Parliament, or the PMQs from earlier this year, this display of mutual goodwill will feel very unfamiliar.

When we asked the chatbot to take it up a level and write a "fiery exchange" between the two politicians, we were swiftly admonished.

"I'm sorry," said ChatGPT, "but I am not programmed to create content that is inflammatory."

Currently, the chatbot's knowledge only goes up to 2021, meaning we were unfortunately not able to simulate a conversation between Sir Keir and Mr Johnson's successor Rishi Sunak.

Moving away from Prime Minister's Questions, we asked the computer to have a go at writing an MP's maiden speech - the first speech they give in the House of Commons.

The result was pretty good.

The fake MP begins by praising Parliament as "an esteemed body". They then express humility at the trust placed in them by their constituents and pledge to "serve to the best of my ability".

Their local constituency's community is praised as "diverse and vibrant".

Robot MP says they will always put their constituent's interests first and promise to work "across party lines to find solutions to challenges we face".

Add in a few references to the constituency's local football club, and this is pretty similar to the average MP's first speech to Parliament.

And at least one parliamentarian, has already had a go at using a chatbot to write their speech.

Conservative MP for Bosworth Luke Evans asked the tool to write a "Churchillian speech on the state of the United Kingdom over the last 12 months" and read out the 324-word script to MPs.

The speech praises the government for "its success in managing the economy" and "implementing its ambitious plan for Brexit".

It finishes with a quote from the wartime leader Winston Churchill: "Success is not final, failure is not fatal: it is the courage to continue that counts", before adding: "I believe that the UK has shown that courage over the past 12 months."

ChatGPT is not yet allowed to "express political opinions or engage in political activism".

So we are unlikely to see it pop up on ballot papers in the foreseeable future.

And that means the likes of Rishi Sunak and Keir Starmer are safe in their jobs...for now.

Let's give the last word to the chatbot.

Asked if a bot could one day be prime minister, it said: "Overall, while it is theoretically possible for a robot to be the prime minister of a country, it would be a challenging task and would likely require significant advancements in artificial intelligence and decision-making capabilities."

Which sounds exactly like the kind of answer a quietly-ambitious politician would give.
#Boris Johnson  #Johnson
Add Comment