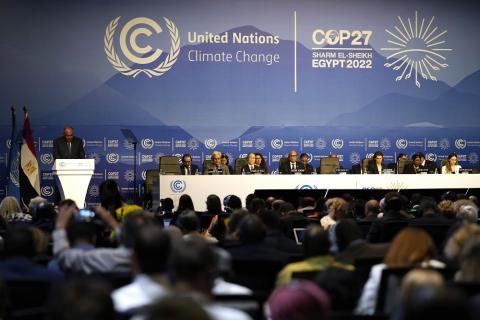 COP27... A Climate Summit with an Economic Spirit

The economy appears to be at the heart of problems and solutions to the world’s climate crisis as the COP27 UN Climate Change Conference got underway in Egypt’s Sharm el-Sheikh on Sunday.
As the world rushed towards industrialization at the onset of the 20th century, it drove unwanted gases into the atmosphere and harvested millions of trees, forests, and green spaces. This resulted in hundreds of billions of greenhouse gas emissions threatening the very existence of humans on the planet.

When taking a closer look, it becomes clear that a transition towards a green economy is needed now more than ever. For that reason, renowned economic figures have led many of the previous COP summits.

In the same fashion, Mahmoud Mohieldin was announced as the UN Climate Change High-Level Champion for Egypt during its presidency of COP27. Besides being a prominent economist and a climate pioneer, Mohieldin is the UN Special Envoy on Financing 2030 Sustainable Development Agenda.

Previously, Mohieldin served as Egypt’s investment minister. He also was the World Bank’s Senior Vice President for the 2030 Development Agenda.

Speaking in several media interviews, he stressed the strong link between climate issues and the economy.

“There is great importance for good spending on climate action,” he said.

Developed countries pledged in 2009 to provide $100 billion annually by 2020 to protect the climate in poor countries. This pledge has largely not been fulfilled.

At the beginning of COP27, Egyptian President Abdel Fattah al-Sisi called for the development of a “roadmap” that would protect the world from the impact of climate change.

“The current session of the Climate Summit (COP27) comes at a very sensitive time, in which our world is exposed to existential threats and unprecedented challenges, affecting the very survival of our planet and our ability to live on it,” said Sisi.

“There is no doubt that these dangers and challenges require quick action by all countries to develop a roadmap to rescue, protect the world from the effects of climate change,” he added.

“Egypt is looking forward to the conference to go from the pledges stage to the implementation with concrete measures, building on the foregoing, especially the outcomes of the Glasgow Summit and the Paris Agreement,” affirmed the president.

In a positive step, COP27 will discuss the sensitive issue of “loss and damage” funding, according to the agenda unanimously adopted on Sunday.

Egyptian Foreign Minister and COP27 President Sameh Shoukry stressed that his country will spare no effort in contributing to the success of this important summit.

“We have become more aware of the danger that surrounds us, and what we have to do to ward off this danger. Egypt is determined to continue this path, and we have a lot of effort before us to move seriously towards implementation and multilateral collective action in the face of the greatest challenge facing our societies,” said Shoukry.

He stressed the need to possess a political will to address climate change, and to move from negotiations and pledges to implementation.

“It comes as no surprise to anyone that the COP is being held this year in a world which is witnessing political turmoil that cast a long shadow on all our nations and has resulted in energy and food crises,” noted Shoukry.

“However, these challenges should be no reason for delaying our collective effort to fight climate change. It is inherent on us all in Sharm el-Sheikh to demonstrate our recognition of the magnitude of the challenges we face and our steadfast resolve to overcome them,” he stated.

Several days ago, IMF Managing Director Kristalina Georgieva warned of an increase in climate disasters in the event of failure to act quickly to confront climate change.

“If we act now, not only can we avoid the worst, but we can also choose a better future. Done right, the green transformation will deliver a cleaner planet, with less pollution, more resilient economies, and healthier people,” said Georgieva.

“While the world’s larger economies contribute the most and must deliver the lion’s share of cuts to global greenhouse gases, smaller economies pay the biggest costs and face the biggest bill for adaptation,” she added.

“In fact, for around 50 low-income and developing economies, the IMF estimates annual adaption costs will exceed 1 percent of GDP for the next 10 years,” revealed Georgieva.
Add Comment