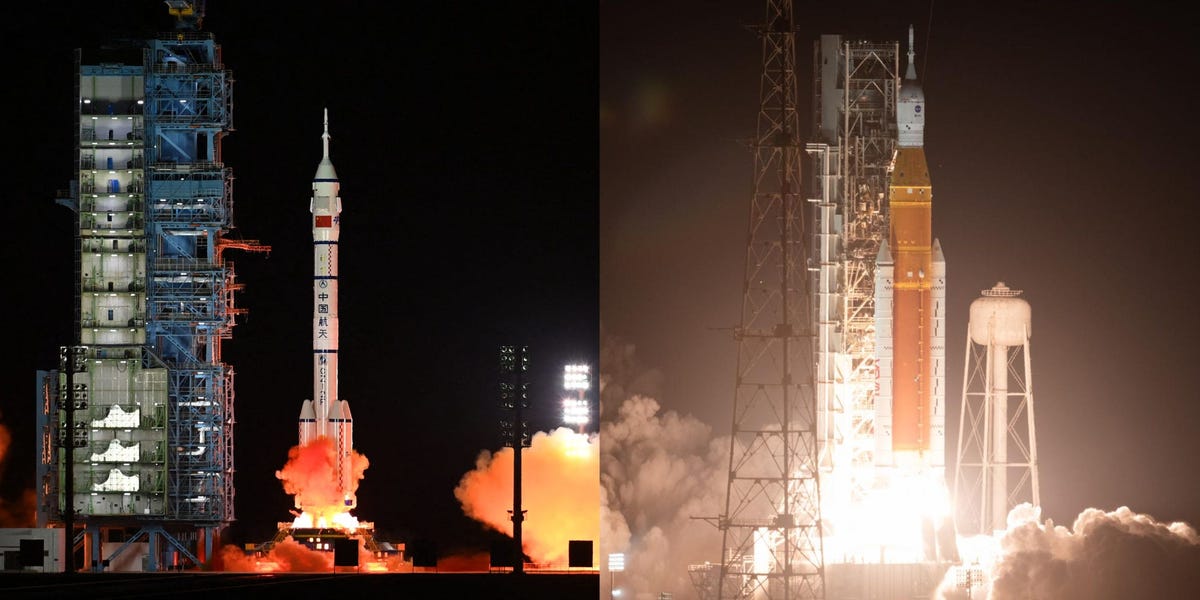 China and NASA are racing to the moon. Side-by-side photos hint NASA has the edge, but China's secrecy makes the race hard to call.

NASA and China each just launched landmark missions in their efforts to put astronauts back on the moon. The spaceflights are very different.

China and NASA are racing toward the moon, each vying for the first human moon landing since 1972. Two recent launches show that NASA may have the edge, but there is no clear winner yet. 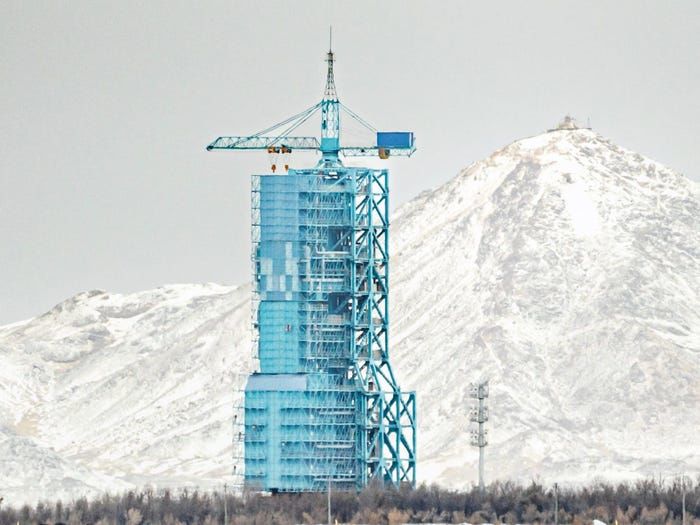 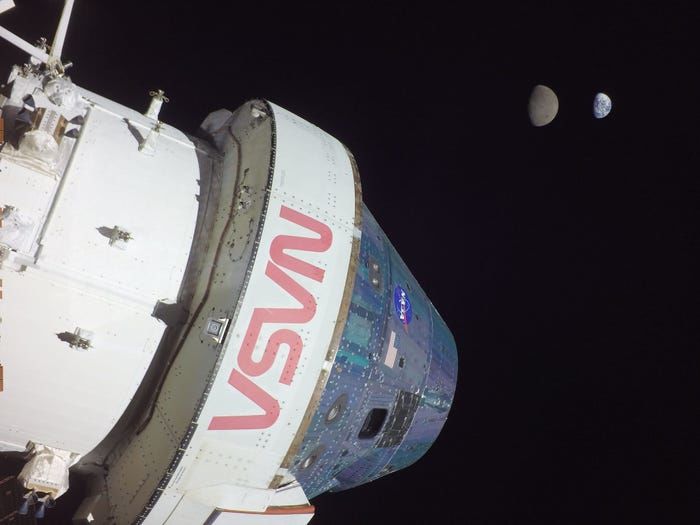 Orion, the moon, and Earth as the spaceship reaches its farthest point from our planet.

China, meanwhile, launched a new crew of taikonauts (Chinese astronauts) toward its new space station on Tuesday. The rocket roared through the Gobi Desert skies, past a quarter-full moon looming low on the horizon.

China built the Tiangong station over the last year and a half, and just completed it in October. This launch establishes the beginning of regular rotations of taikonauts staffing the orbiting laboratory. 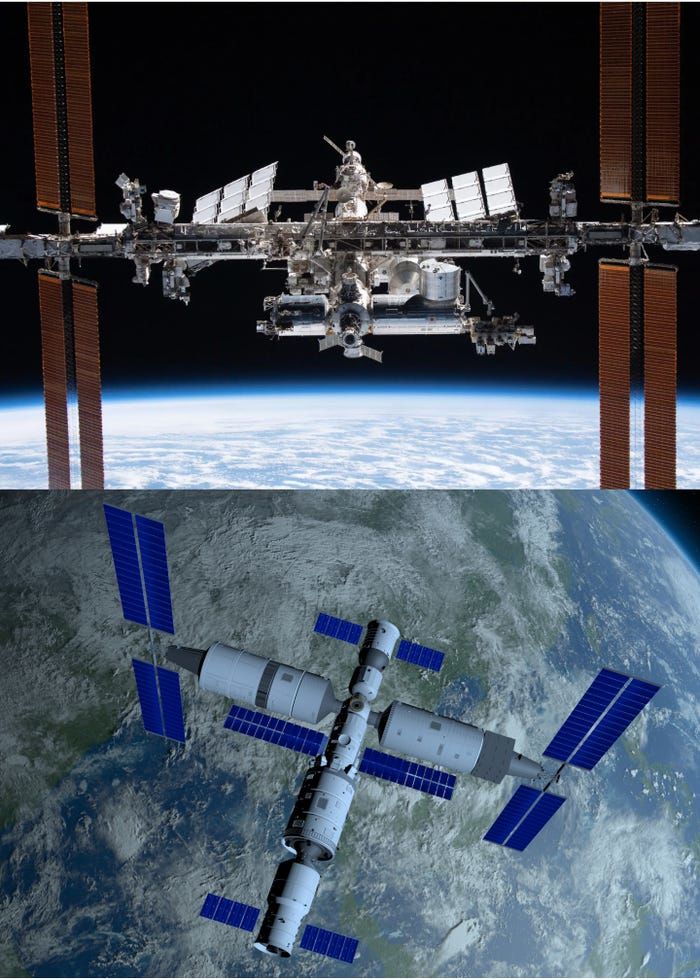 While NASA is testing its moon hardware in lunar orbit, China is stuck firmly in Earth's orbit. Chinese officials say their space station is a crucial step toward the moon, and they're developing the hardware for a lunar landing. With the limited information China has shared about its lunar program, it's hard to assess how close it is behind NASA.

NASA's chief sees China as an 'aggressive competitor' for the moon 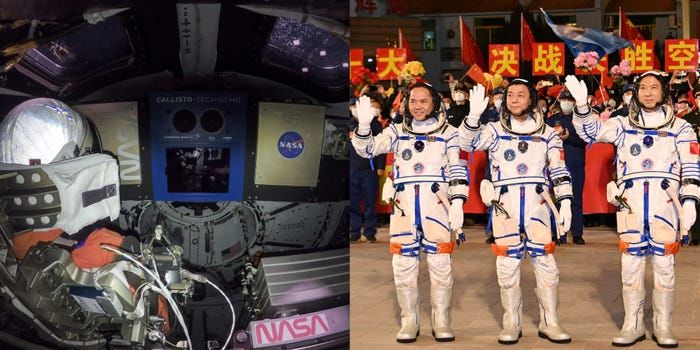 A mannequin is onboard NASA's Orion spaceship, left, while China's launch sends three taikonauts, right, to its space station.

On paper, NASA is aiming to land its astronauts on the moon's south pole by 2025, but many experts and the agency's Inspector General say that timeline is unrealistic.

China could land its own people on the moon by 2030, Chinese lunar program designer and engineer Ye Peijian told state broadcaster CCTV in November 2021, according to Andrew Jones, the leading English-language journalist covering Chinese space programs.

The secrecy of China's lunar program makes it difficult for outside analysts to assess that timeline, but NASA's chief has expressed a sense that the race is tight.

"We have every reason to believe that we have a competitor, a very aggressive competitor, in the Chinese going back to the moon with taikonauts," Bill Nelson, NASA's administrator, said in a press briefing in November 2021.

"It's the position of NASA and, I believe, the United States government that we want to be there first, back on the moon after over a half-century," he added. 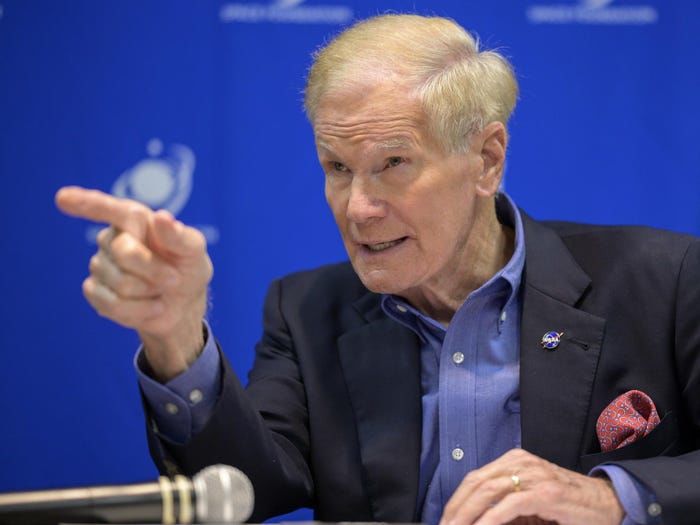 Administrator Bill Nelson said NASA wants to get to the moon before China.

Nelson, other Congress members, and past NASA administrators have previously pointed to China's ambitions in space as cause for concern, and a reason to increase NASA funding.

"The Chinese space program is increasingly capable of landing Chinese taikonauts much earlier than originally expected, but whatever," Nelson said, adding, "We are going to be as aggressive as we can be in a safe and technically feasible way to beat our competitors with boots on the moon."

Base-building on the moon is groundwork for the bigger space race: Mars 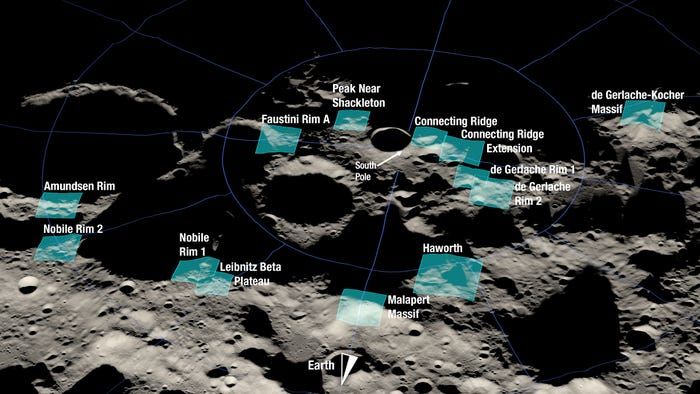 NASA has identified these 13 regions as potential targets for its next human moon landing.

China and NASA have identified some of the same target landing sites on the lunar south pole, Jones reported.

Both have long-term plans to construct permanent stations on the lunar surface, and they're building coalitions to work with other nations there — but not with each other.

The south pole of the moon could become especially valuable real estate, since it seems to hold much of the moon's water. That will be a critical resource for space programs that plan to send astronauts from the moon to Mars — as NASA plans — since they can break the water down into hydrogen and oxygen for rocket fuel.

"If the target is to land on the moon and back, clearly the US is going to beat China. There's no question about it," Loverro told CNN. "But if the target is landing the first humans on Mars, the answer is a lot less certain."