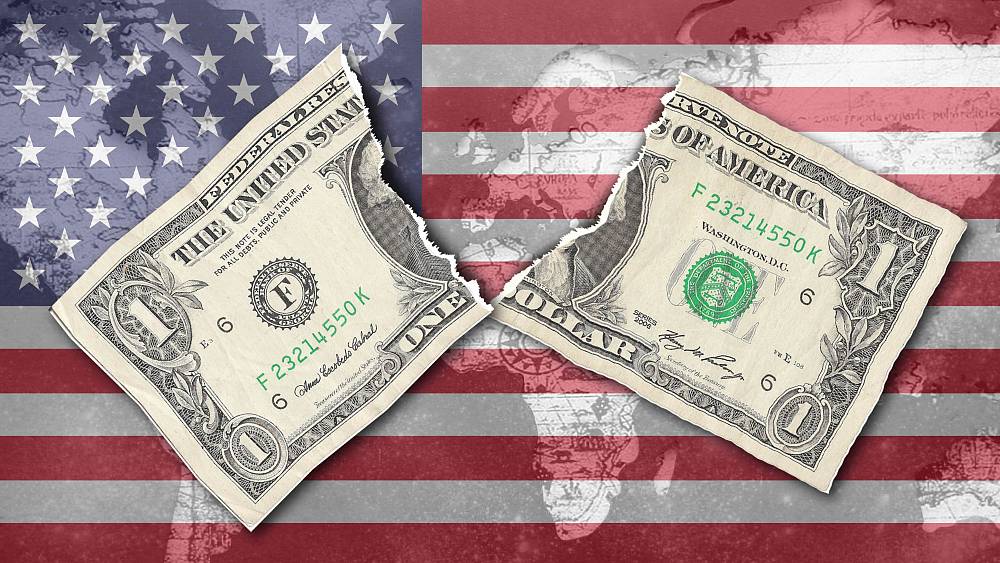 Can the US dollar be toppled as the world's premier reserve currency?

The power of the dollar as the world’s premier reserve currency gives the US far-reaching advantages over its rivals. But with Russia and other BRICS nations signalling their intention to challenge this power, is it under threat?

The move is likely intended to target the US dollar’s status as the world’s premier currency, a state of affairs that has persisted for almost 80 years.

Russian leaders have made no secret of their suspicion of this status quo with foreign minister Sergei Lavrov suggesting recently that the dollar’s days of being top dog are numbered.

“The reliance on the dollar as the instrument supporting the world economy is not very promising, frankly speaking,” he said during a recent trip to Ethiopia.

But to understand what is at stake, we need to look at how reserve currencies function and why the dollar’s unique position has given the US what former french president Valery Giscard d'Estaing famously termed its “exorbitant privilege” in world affairs.

Today, most financial transactions, international debt and global trade invoices are denominated in dollars and close to 60 per cent of global foreign exchange reserves were held in dollars as of 2021.

"Unlike other countries, the United States can meet their international obligations by printing money," explained Luca Fantacci, an economic historian at the University of Milan (Università degli Studi di Milano)

"Meaning that they have no budget constraints in making expenditures, loans or even grants abroad".

US dollar hegemony dates back to the Bretton Woods conference held in 1944 when 44 Allied nations during World War II agreed on the establishment of a new international monetary system.

Why do countries hold foreign currencies in reserve?

The first is so that countries can meet their foreign liabilities.

"They have to meet obligations with foreign banks and other economic actors. And the foreign exchange reserves are an instrument to meet those obligations," he explained.

The other reason countries hold foreign exchange reserves is to prop up their own currency when needed.

"Whenever there is a threat of a devaluation of a currency, what the central bank does is purchase its own currency on international markets," Fantacci told Euronews Next.

"In order to do that, they have to have a reserve of foreign exchange that is used widely on international markets, like the dollar, like the euro and other major currencies, to prop up their own currency".

But in February, dollar dominance allowed the US to unleash a powerful economic weapon against Russia in retaliation for their invasion of Ukraine.

Together with its allies, they froze the Central Bank of Russia’s reserves, effectively cutting off the country from roughly half of a war chest worth almost $630 billion (€598 billion) - hence removing the country’s means of stabilising their currency by purchasing rubles with dollars on foreign exchange markets.

Some warn, however, that the act may have a negative effect on dollar hegemony going forward.

As Fantacci explains, if a country runs the risk of holding dollars of having them seized precisely when those dollars are needed to meet foreign payments or prop up their currency it - "provides an incentive not only to Russia but to other countries that have been hit by similar provisions in the past to diversify and to move their reserves and into other currency areas".

Efforts to dilute US dollar dominance

According to Fantacci, there have already been significant manoeuvres by global powers, both US allies and non-allies alike, to dilute the power of the dollar.

The establishment of the euro was partly conceived as a means of protecting the EU economy from foreign exchange shocks and limiting dependence on foreign currencies.

At present, the euro constitutes the second largest share of global currency reserves at almost 20.6 per cent.

Additionally, at the beginning of March, the Eurasian Economic Union - which brings together Russia, Armenia, Kazakhstan, Kyrgyzstan and Belarus - reached an agreement on the need to develop a new international currency.

Back in 2009, the governor of the Central Bank of China, proposed a reformation of the international monetary system based on a commodity-backed currency - an idea that was originally developed by renowned British economist John Maynard Keynes as part of Britain’s post-World War II planning.

The idea was backed by other BRICS countries - a grouping of emerging economies comprising Brazil, Russia, India, China, and South Africa - but was nevertheless rejected by western nations.

Towards a new international monetary system?

Still, despite these efforts, it is perhaps premature to declare the reign of the dollar over.

The US remains the country with the deepest capital markets in the world and even in times of crisis, like during the COVID-19 pandemic, investors have rushed to put their money in US dollars, considering it a safe bet for capital flows.

While China remains the largest exporter in the world and is coming close to challenging the US in terms of the size of its economy, it accounts for a relatively modest share of global currency reserves.

This is largely due to the capital controls employed in the country.

"Unlike the dollar or even the euro, the renminbi does not have free and deregulated capital markets where it can be invested and where the assets denominated in renminbi can enjoy liquidity, which is essential for financial markets and not just central banks that invest in these assets," Fantacci explained.

Fantacci, however, does not exclude the possibility of a reordering of the international monetary system that could permit the renminbi to become much more powerful as a reserve asset.

"What we will see is possibly something that never has happened in history, and that is a fragmentation of the international monetary system with several currency areas that compete and several strong currencies that maintain local, regional hegemony," he said.

According to Fantacci, a future monetary system could involve different ways of interpreting the function of international money by different currencies.

"And I think this is definitely not an encouraging perspective for the United States and the West in general".

Oh ya 123 days ago
Look up history folks, ALL former world currencies have collapsed. The USA shot themselves in the head when they started using the dollar as a weapon against countries that they were mad at and then getting Russia kicked off the Swift System was likely their final mistake. If you think inflation is bad now just wait until all those USD that will not be needed by foreign countries return to the USA. The USA took advantage of the world with their reserve world currency status and the citizens will pay the price
View all comments (1)Add comment