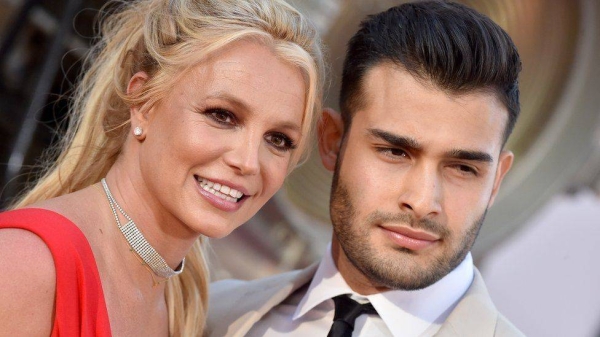 Britney Spears has married fiance Sam Asghari, seven months after being freed from a conservatorship that she said had prevented her from getting wed.
The couple tied the knot in an intimate ceremony in California on Thursday.

But preparations were disrupted when Jason Alexander, who was briefly married to the pop star in 2004, was arrested after allegedly gatecrashing.

He streamed video on Instagram Live before the ceremony apparently from inside her home before being tackled.

Ventura County Sheriff's Department told the PA Media news agency an altercation had taken place with security officers, and Alexander had been charged with four misdemeanor offenses of trespassing, battery and vandalism.

"He was able to find his way onto the property and was confronted by security," a police spokesman said.

Alexander was married to Spears, his childhood friend, for less than 55 hours in 2004 before it was annulled.

His video showed him walking through her home looking for her and then going into a marquee where the finishing touches were being put to a large display of roses. He claimed Spears had invited him, saying: "She's my first wife, my only wife."

The ceremony went ahead later on Thursday, with stars including Madonna, Paris Hilton and Drew Barrymore reportedly among the guests. Donatella Versace designed the wedding dress, although no photos have been released.

But Spears' father, mother and sister were reportedly not expected to be at the wedding after relations broke down because of the conservatorship.

In November, Spears, 40, was released from the controversial 13-year legal guardianship, which had seen her father Jamie control many aspects of her life.

Last year, she told a court it had meant she was "not able to get married and have a baby".

Jamie Spears previously said the conservatorship had been "necessary" for his daughter's mental health, but agreed it was time for her "to re-take control of her life".

This April, she announced she had got pregnant, but announced the following month she had suffered a miscarriage.

Spears met 28-year-old personal trainer Asghari in 2016 on the set of her music video for the song Slumber Party.

In an interview with BBC Persian, conducted the month before her pregnancy announcement, Asghari said that marriage and plans to have children "should have happened three years ago".

The couple got engaged last September, two months before the end of the conservatorship

He said: "I am very ecstatic this day has come, and they are married. I know he wanted this for so long. He is so caring and supportive every step of the way."

Asghari is the star's third husband. After Alexander, she was married to Kevin Federline from 2004 to 2007.
Add Comment