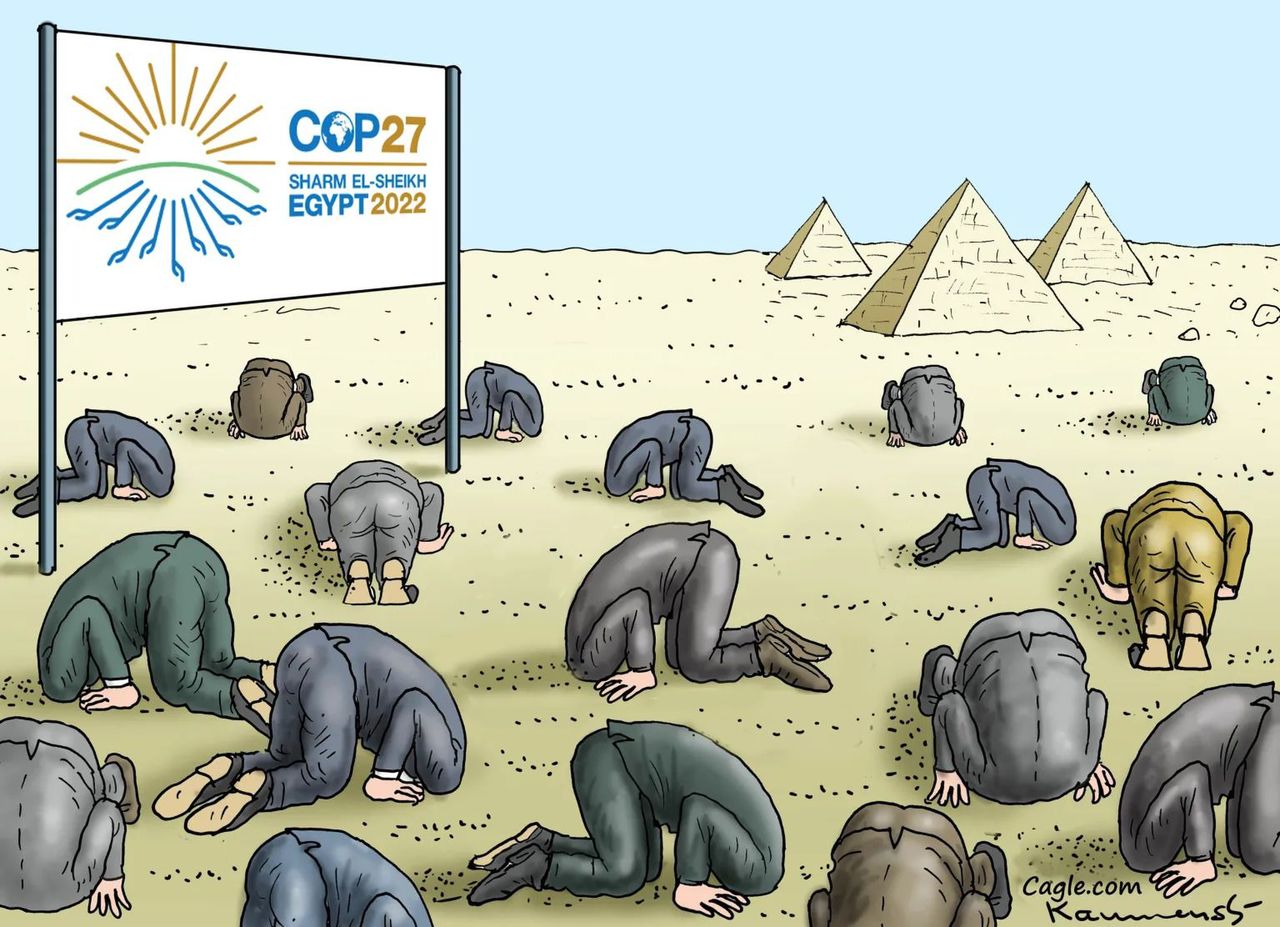 Biden's mission at climate summit: Convince world 'it’s different now', as if no one knows it already.

Joe Biden speaks at the COP27 climate conference on November 11, 2022 in Sharm El Sheikh, Egypt. He only read script from a paper, said nothing. Biden’s visit was just a few hours long as he headed for Cambodia to say there nothing while reading from paper, and then on to next week's G20 summit in Indonesia, to try to sell south east Asia weapons against conflicts they do not have. Delegates at COP27 were divided on whether the U.S. president's three-hour visit met the mark.
We expected the US leader to come up with a plan how to practically fight climate change. He came out with nothing but causing even more damage to planet earth with his Air Force 1 useless trip.

President Joe Biden arrived here eager to solidify U.S. leadership in the fight against climate change, but struggled to win over a global gathering that has grown wary of American promises.

His address Friday to a crowd of 1,600 delegates, negotiators, industry leaders and activists came several days after most world leaders had made their own urgent pleas for action at the global climate conference. He began with a message that he said he’s been waiting decades to deliver.

Biden’s visit to Sharm El-Sheikh, delayed by the U.S. midterm elections, was just a few hours long as he headed for Cambodia and then on to next week’s G20 summit in Indonesia. But it drew cautious welcomes from delegates who simultaneously recognized the necessity of U.S. engagement in efforts to fight climate change, while also acknowledging that it has not proven a reliable partner.

“Veterans of this process will tell you that they have been more than frustrated with many pledges that are not substantiated with finance and timelines. This time is different,” said Mahmoud Mohieldin, Egypt’s former investment minister and the United Nations’ high-level champion for climate action. “We need this political leadership.”

The summit takes place amid a storm of global challenges — a looming recession, energy and food crises, nations teetering on the edge of default. All of it is happening as climate impacts grow more threatening.

That he showed up at all sent a signal that the world’s richest nation — and its biggest climate polluter over the last 200 years — takes the threat of climate change seriously. It came three months after Biden signed the country’s strongest climate law, after a generation of failed attempts.

Biden opened with a nod to his administration’s “bold” climate agenda, which he launched his first day in office, and his move to rejoin the 2015 Paris climate agreement. That prompted the audience to applaud, and Biden warmly apologized for his predecessor’s decision to ever pull the U.S. out of the landmark climate accord.

He also lauded the U.S. Inflation Reduction Act, H.R. 5376 (117) — the United States’ historic spending package, with $369 billion for climate initiatives. Passage of that legislation in August all but ensured that Biden’s presidency will be remembered as a pivotal period of clean energy investment.

Biden’s speech was an American event in every sense. That was clear when the president’s mention of U.S climate envoy John Kerry received a bigger round of applause than Egyptian President Abdel Fattah El-Sisi. The guest list, while large, was a select portion of the 46,000 delegates at the conference. Even U.N. officials had to ask the U.S. State Department for a ticket.

Throughout his 20-minute address, Biden laid out U.S. plans to invest more in climate adaptation efforts in Africa, contribute to cutting methane emissions, support Egypt’s clean energy transition and back initiatives to reduce the carbon pollution of heavy-emitting sectors like shipping.

He also promised to fight for more money to help climate-vulnerable countries shore up their defenses in the face of growing climate-driven disasters.

That includes $150 million to help Africa — the world’s most climate-threatened continent — expand early warning systems, broaden access to climate finance and strengthen food security, and a doubling of money, to $100 million, to fund adaptation globally.

The challenge will be battling Republicans in his own country who have resisted efforts to inject more money into combating climate change in other parts of the world.

“Without Republicans engaging in this debate, we will not make the progress we need to make as a country,” said U.S. Rep. John Curtis of Utah, a rare Republican who supports action to combat climate change.

‘Promise all he wants’The world is wearily aware of American divisions. The United States’ contribution to climate finance in developing countries lags about $32 billion lower than its fair share, according to a metric based on its historical emissions developed by Carbon Brief. Republicans have long withheld permission to send more money.

Mingling by the podium after Biden’s speech, Seyni Nafo, a Malian diplomat who this year brokered a deal with the U.S. to fund adaptation measures in Africa, said: “He as a president is doing everything he can. … The president can promise all he wants. But it’s Congress which appropriates.”

The money Biden has put on the table pales in comparison to the trillions of dollars needed, not just to prevent climate damages but to pay for them when they do happen.

Compensating poorer nations for irreparable climate damages is the top issue at this year’s climate talks. It was put on the formal agenda for the first time, after years of being blocked by wealthy nations that have refused to pay for the harms their emissions cause.

But poorer countries remain wary of the U.S. on the issue known in diplomatic circles as loss and damage. Biden pledged support to an insurance-based initiative led by the G7 that would help countries recover from climate-related damages, but the U.S. hasn’t offered any money.

Small island states and other countries whose economies are increasingly threatened by the effects of a warming planet have been pressing for a dedicated fund that could be put toward repairing infrastructure and making countries whole when lives, homes, livelihoods and culture are lost.

Biden acknowledged that his nation has a responsibility to support poorer countries as they struggle to green their economies, saying that if rich countries can finance coal in developing nations, “there’s no reason why we can’t finance clean energy.”

But many of the poorest and least developed countries say they need a different type of funding, the kind that helps them harden infrastructure to face more extreme storms or invest in drought-resilient farming.

“I think there is genuine appetite to recognize that this is a serious concern that can no longer be put on the back burner,” said Aminath Shauna, environment minister of the Maldives.

“I also think the U.S. is such a powerful partner in global institutions and in global politics that they can turn things around,” she said. “This has come to a point that we can no longer ignore.”

Biden’s confident tone masked the political tensions resting on each word of his speech — both at home and among the nations invited to hear him speak.

While passage of his climate law is a victory for the U.S. president, it’s bittersweet for some of his closest allies.

“First and foremost [it’s] a huge contribution to making the transition to a sustainable economy in the U.S., so it can only be welcomed,” the European Union’s top climate envoy, Frans Timmermans, told reporters in an interview on Friday.

But the law’s made-in-America requirements have sent shivers through European industry at a moment when it’s reeling from the energy crisis. “Sometimes I feel this is not seen enough on the other side of the Atlantic,” Timmermans said. “They have cheap energy, we have very expensive energy, and that is really, really hurting our industry and really, really painful for our households.”

The Conservative Climate Caucus — a group of Republican members of Congress — held an event to showcase an alternative, more industry-friendly vision for fighting climate change. Rep. Garret Graves of Louisiana said the plan accepts the “facts” that oil and gas demand around the world would continue to grow. Two weeks ago, the International Energy Agency said demand for all fossil fuels will peak this decade.

Biden also carried fossil fuel contradictions with him to COP27. His speech was interrupted by a group of Native Americans who were protesting the U.S. oil and gas industry. The president had touched on the important role Indigenous landowners have in protecting nature, but as the group was marched from the venue by security, one of them said: “President Biden says that Indigenous people have the answers, but he refuses to listen to Indigenous people.”

“That’s our president,” said another. “We don’t know when we’re going to be in a room with a person like that again.”

Then they were taken into the desert night and Air Force One carried the president away to face other pressing global problems.
#Joe Biden
Add Comment