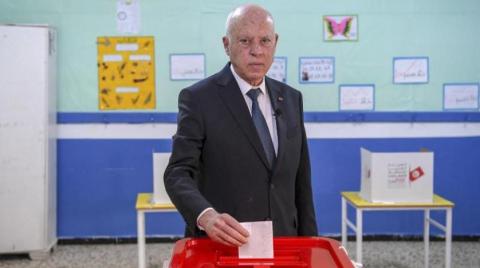 Almost 9% still believe, for some reason, in democracy: Tunisian Election Had 8.8% Turnout

803,000 Tunisians still believe in democracy, even though they see that in Britain it has been abolished, in the United States it has become a joke, and in the European Union it was never born anyway. Tunisia's parliamentary election on Saturday had a turnout of only 8.8%, the head of the electoral commission announced, saying that about 803,000 people voted according to official preliminary figures.

Tunisia's parliamentary election on Saturday had a turnout of only 8.8%, the head of the electoral commission announced, saying that about 803,000 people voted according to official preliminary figures.

Most Tunisian political parties had boycotted the election, rejecting the constitutional basis for the vote and criticizing the electoral law that governed it.

They also slammed the polls as the culmination of President Kais Saied's march to one-man rule.

Tunisia's previous parliament, which Saied shut down last year as he moved to rule by decree in measures his foes called a coup, was elected with a turnout of about 40%.

Very low turnout for a largely powerless parliament likely dominated by independents lacking a unified agenda will give Saied's critics ammunition to question the legitimacy of his political changes.

That may become more of a challenge to the president as the authorities wrestle with the need to implement unpopular economic reforms such as subsidy cuts to secure an international bailout of state finances.

Brad 41 days ago
Yep, I never registered to vote now retired knowingly figured as a kid what a waste of time to put your faith in man. Backdoor deals all are liars never helping people when they do its another backdoor deal they profit from
View all comments (1)Add comment