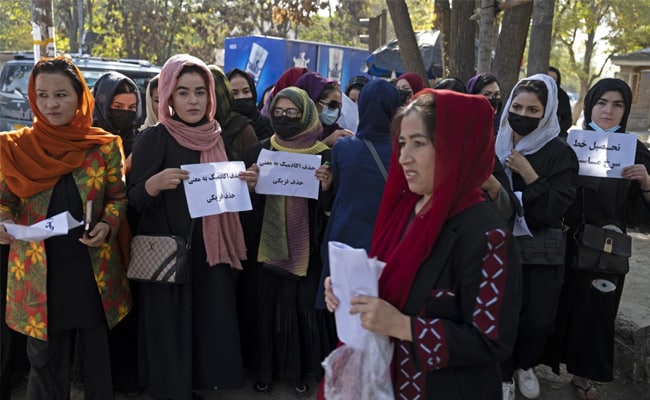 The protesters claimed that all the evicted students were women in a move that comes as the Taliban has increasingly restricted girls' access to education.
About 30 Afghan women protested in front of Kabul University on Tuesday after authorities expelled students from the dormitories allegedly for breaking rules.

The protesters claimed that all the evicted students were women in a move that comes as the Taliban has increasingly restricted girls' access to education.

"Today's protest was for girls who have been expelled," organiser Zholia Parsi told AFP after Taliban forces dispersed the rally.

Organisers also called for the reopening of girls' secondary schools, which have been shut since the Taliban returned to power last year.

In several cities, women have staged sporadic protests against harsh restrictions imposed by the hardline Islamists.

The rallies are usually swiftly put down -- often harshly -- and journalists have increasingly been prevented from covering them.

"Don't expel us... education is our red line," chanted the protesters in front of the university.

The Ministry of Higher Education said Monday that an undisclosed number of students "who violated the rules and regulations of the university's dormitory" had been expelled from their accomodations.

It did not say if they were all women.

In response to international pressure over girls' education, Taliban officials have said the secondary school closures are temporary, but they have also wheeled out a range of excuses for the shutdown -- from lack of funds to time needed to remodel the syllabus along Islamic lines.

It was the sector's second such reshuffle in a month, following the appointment of a new minister of education.

Mr Nadeem, previously the governor of Kabul province, has for years held several key positions in the Taliban and was formerly chief of intelligence for the movement in eastern Afghanistan.

Mr Nadeem's personal views on girls' education are unknown, and it remains unclear why his predecessor Abdul Baqi Haqqani was removed.

"Given his proximity to the supreme leader and his performance he has been entrusted with key positions," a Taliban official who worked closely with Mr Nadeem told AFP on condition of anonymity.
#Afghanistan
Add Comment